Fear and restriction versus instinct and freedom. Can these forces co-exist from an individual, gendered, and cultural perspective?

Interrogating climate, social structures and breaking apart archaic patriarchal views on gender and power structures, this play highlights the absurdity of the current environment we are in politically and socially. If we can laugh at how absurd our power figures are and how absurd the notion of power is, we can see the ludicrous side to our current political state and therefore seek change.

The future is now. Making change comes through powerful action. Visceral, physical, musical, high octane satirical theatre involving some of the most skilled actors in Melbourne, is how we want to evoke real change.

Ultimately we want to bring to life the best possible version of this story for YOU. We don’t want to make tired work. We want to bring something to you that is visually, textually, and musically unforgettable, and to do that we need financial assistance.

Please help us to help change.

Any donations are hugely, hugely appreciated, and we thank you in advance for your ongoing support in making life changing theatre. 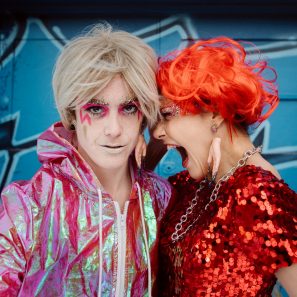 Ellen Grimshaw is a Melbourne based comedic-feminist writer and performer who creates experimental theatre that challenges the norm in all senses of the word. From her own personal experiences she explores intolerable social injustices and discrimination, ripping apart gender archetypes through explosive satire and celebrating queerness, cultural diversity, and confidence
unapologetically.

Ellen has been awarded for her performance in feature film ‘Bad Behaviour’, and has appeared in dozens of independent theatre productions in Brisbane and Melbourne since graduating from QUT ‘Fine Arts Acting’ in 2009. Ellen most recently appeared in ‘Just Us Girls… What’s A Girl?’ in 2019, which she also wrote and produced; and will appear in season 2 of series ‘Bloom’, on Stan.

Ellen was awarded a performing arts grant from the Ian Potter Cultural Trust to work with The Wooster Group theatre, playwright Sibyl Kempson, and Elevator Repair Service theatre in New York City in 2019. Ellen graduated from the Victorian College of the Arts in 2018 with a Master in Writing for Performance, where she also wrote ‘We’re Probably Really Really Happy Right Now’.

Hi supporters and future supporters of this production of Were Probably Really Really Happy Right Now! We have locked in an INCREDIBLE cast for you, and can’t wait to start rehearsals!

The second curated season of independent theatre in Adelaide’s most exciting new venue.