In 2018 Deb, WellBless co-creator, was diagnosed with cancer, and was told by friends that she should reconsider her approach to life – her diet and exercise, her stress levels, and the toxicity of those she had in her life. The idea that she was to blame for getting cancer through her choices and not being worthy enough of more ‘love’ in her life really stuck – and it didn’t make the healing process any easier.

The wellness industry tells women they need to “purify” their bodies, ‘cleanse themselves’ with green juices, and ‘empty their minds’ of stressful thoughts. The message is clear – our bodies are dirty and our thoughts are making us sick. It’s just the patriarchy wrapped up and sold as overpriced feminism. WellBless explores all of this through a satirical lens.

Women are the world’s biggest consumers but for too long our stories have been ignored. This culture has empowered the wellness industry to grow, since it is one of the few areas where women have risen to the top and can control the narrative.

Roughly 134,000 Australians are diagnosed with cancer every year; many women whom have not historically been listened to by their doctors are turning to un-scientific therapies because industry gurus appear to listen. A trillion dollar industry, wellness grows by preying on the vulnerable. WellBless explores the reality that it’s an industry that kills.

The WellBless cast and team have all been personally touched by this project and impacted by the wellness industry in different ways. This project will fund performers and key creatives for our play: our six actors, our production designer, our director, our lighting and sound designer.

The end result will be helping female theatre practitioners establish their cannon of work and help cement their identity in the Australian theatre ecology. 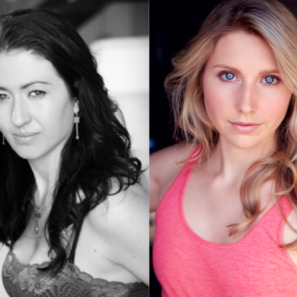 Debra Thomas and Ella Barton are the writing team behind WellBless, premiering at TheatreWorks in March 2020.

Debra Thomas is an award-winning writer and performer. Recent works include Chimera (Frankston Arts Centre, 2018), Feminazi (Sydney Theatre Company, 2016), The Man’s Bitch (University of Alaska 2018; Sydney Theatre Company 2015; NIDA 2014). She is the winner of the 2014 Patrick White Playwrights’ Award from STC and is a graduate of NIDA (2014). Debra also works in publishing, writes novels and children’s books, mentors writers, and teaches writing through NIDA Open.

Ella Barton is a writer, actor and industry all-rounder. She has worked on a range of feature films, music videos, television series and theatre performances. These include productions such as Ride Like a Girl, Offspring, Bleeding Steel, The Dressmaker, and Winchester. A graduate of Swinburne’s Bachelor of Film and Television, Ella has also studied acting at The American Academy of Dramatic Arts in New York and NIDA Open in Melbourne. Ella works at the Australian Children’s Television Foundation.

Due to the current climate and the cancellation of the Melbourne International Comedy Festival, WellBless has been postponed until 16–26 September at Theatre Works.