What is remarkable is, I reached out to people in March 2020 when the world went crazy and they said ‘yes’ to recording themselves for four months and collaborating in the filmmaking process. Most of these people I had never met in person, and some I still have not. I never imagined two of the artists would become finalists in The Archibald and Wynne prizes, held by Art Gallery NSW. Nor that Mikey would keep recording through his cancer treatment. There are 15 + films, some still to be edited. After the success of my first campaign, I decided to step out in faith and make all the films available on a website free to all. They are remarkable stories that capture history through the eyes of the artists.

This final campaign will go to the upkeep and maintenance costs of the website and entering the films into festivals around the world, and to cover some of the hard costs of making 15 + films.

Creativity in its infinite guises is so cathartic to the human condition, to simply observe it can be therapeutic.

And so I did.
And to quote Artist Catherine Stringer who is EP 1 – “If you worry about where it is going to go and how much it will cost you will never create.”

I want people to be inspired: go to a gallery, buy artwork, create artworks, play an instrument and, in general, seek freedom and peace of mind through creative expression. Raise awareness of how art in its many forms is good for mental health and wellbeing and is a powerful tool for healing and centring the mind.

I hope people will share these films to make a difference in someone’s life.

By watching and donating to the web series I hope people will be inspired to create. 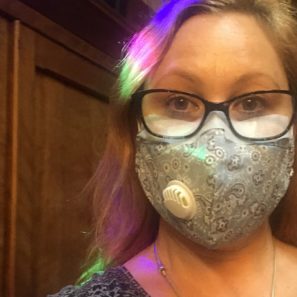 Loretta is a filmmaker trained in the ’90s at the ABC by some of the best editors in Australia.

Her first documentary series ‘It’s a long way’ examined the realities of working in the Australian music industry and aired on Channel [V] in 1999. In 2002 she directed for Becker Entertainment ‘InspirAsians’, an 8 part biographical documentary arts series for Channel 5 MediaCorp Singapore. Moving to London in 2005 she joined the Charity Global Angels UK filming short observational documentaries in India, Kenya and Khayelitsha South Africa working with highly sensitive issues and vulnerable contributors in unstable areas, she crafted stories as part of their funding raising and awareness programs.

In 2018-2019 Loretta worked with an upcoming young director, editing and shaping the ABC iView series ‘Studio A’, 6 short profiles on a Sydney-based collective of artists with intellectual disabilities. In March 2020 she embarked on an experiential documentary ‘Watcha Doin’ Today’ that follows artist around Australia self-film their creative journey for four months during the COVID 19 lockdown.

Loretta has a passion for telling art centre narratives that inspire thinking, engages hearts, one story at a time.

‘Sadcore’ songstress and single mother, Firefly had her debut album scheduled for March 20th – the very day Australia closed its borders to non-residents. Her story is live on the website.

When her exhibition in the USA cancelled, her artworks line every wall in her house. Carolyn turns to Instagram to keep herself inspired and develop a community as she continues to paint.