Uked! is the hilarious and poignant story of Karla, who is dumped on her 50th birthday by her violin-playing boyfriend, Brian. Desperate to belong and prove her musical worth, she takes up the ukulele and joins a dating site, learning that love and the ukulele have a lot in common.

Uked! celebrates the power of the humble ukulele to bring people and communities together and reclaim their musicality.

Audience members can bring their ukuleles and play and sing along, (a screen will display chords and lyrics) or join Karla on stage playing her fellow club members. (Those who hate audience participation will be seated near the bar.)

Directed by Kate Stones, with Rebecca Morton as Karla, Pete Gavin (a real-life ukulele teacher) as everyone else and cameo performances by Tex and Fi Chant, the show features all local talent and premieres at the historic Guildford Music Hall in Central Victoria from 20-30 June.

Uked! addresses the need for 24 per cent of the local population who comprise empty nesters, older workers, pre-retirees and seniors, to find meaningful and accessible ways to fill their time, learn new skills and avoid social isolation. Many of these have moved from other parts of Victoria or Australia for affordable housing and are seeking community and connection.

Through the character of Karla, Uked! explores the timely themes of ageing, loneliness, social change and identity and belonging in an innovative way.

In a world that is increasingly divided and unequal, the ukulele provides an important social bridge. Uked! contributes to this in a unique way, democratising theatre and music one show at a time.

While the show is getting heaps of local support, I need help to pay my artists. I strongly believe that artists, like all other professionals, deserve to be properly paid, and I hope that other passionate ukulele players and those who believe in the transformative power of theatre will support us.

The funds raised will be used to help pay wages for two-and-half weeks of full-time rehearsal, plus eight shows for the two main actors and two minor roles.

The result will be a high quality, professional fun show that brings people together from all over country Victoria and beyond to promote musicality and social connection, and raise the profile of the town.

Ultimately, we hope to tour and publish the script and license it for a small fee to uke groups to perform as a fundraiser, with members playing all the individual parts.

You don’t have to play the ukulele to enjoy the show or support us. Anyone will relate to the story, with its universal themes of identity and belonging in a changing world.

Find us on Facebook – Uked! the first play-along ukulele musical – or get in touch at uked.beintheshow@gmail.com

All donations will be gratefully received and we’ll keep in touch. If this season is a success, we may even be able to come to your town. 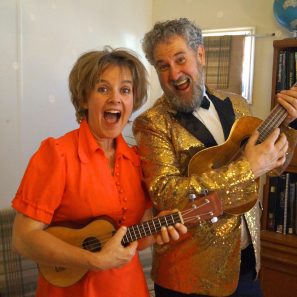 I am a playwright and former journalist whose plays have been performed both nationally and internationally, including the UK, USA and Singapore, and have been translated into Turkish and Tamil.

I’m best known for my play e-baby, about the relationship between an infertile woman and the surrogate she hires, which premiered at Melbourne’s Chapel off Chapel in March 2015 to critical acclaim, with direction and dramaturgy by Anna McCrossin-Owen.

e-baby has had a production every year since, including The Ensemble Theatre, Sydney, in 2016, directed by Nadia Tass; and Tasmanian Theatre Company in Hobart in 2017, directed by Anne Cordiner and Julie Waddington.

e-baby Hobart was nominated for Best Production in the 2018 Tasmanian Theatre Awards and Katie Robertson won Best Actor (Female) in a Professional Production for her role as Nellie.

My new play, d-baby, about a donor conceived teenager searching for her true identity, has had extensive development and is now seeking expressions of interest.

I wrote Uked! – the first play-along ukulele musical, to celebrate the power of the humble ukulele to bring people and communities together, and as an antidote to the misery of the news. I also play the ukulele.

A 9-part anthology horror film set in the suburbs of Perth.

UneARThed is a social enterprise with a mission to empower artists affected by homelessness. This project aims to provide our artists with assistance so they can design, produce and sell T-shirts. Help us get started!