Written after the suicide of a friend Marooned has travelled quickly from our living room to a tiny theatre to the following, and all of this driven by audiences urging us to “Take it everywhere.”

Marooned is a powerful suicide prevention play aimed predominantly at men.
What we have achieved so far.

The Melbourne Theatre Company gave us their Lawler Theatre rent free.
The Australian Defence force books two private shows. If they like it they’ll tour it to all their bases.
Corowa and Yarrawonga book two shows. Other towns are in planning.
2011 Australian of the year Simon McKeon A.O. on board.
Playwright interviewed on Jon Faine’s conversation hour.
>Four Australians, who have taken their own lives and failed are Marooned in a waiting room in the afterlife. Finally they come to realize that in order to get home, instead of helping themselves they have to save each other. It’s funny, moving, original and not only leaves people in tears but remarkably, feeling uplifted

Suicide is one of our greatest problems, and so our play Marooned tackles that head on.

As one audience member said in a comment,
“There are no Elephants in this room.”

She’s right, the language is raw and confronting and often doesn’t let up and instead uses humour and empathy to make it palatable.

Yet despite all the rules it breaks and the pain it explores, the one comment we are hearing the most from the audience is that it leaves them feeling uplifted.

And whether you agree or disagree with our approach you have to admit that that is an interesting discovery.

And while they are uplifted they also hang around to chat about the play and its issue and we believe the conversations that could be harnessed there could bring about change.

We need $10 000 to purchase lights, a transportable stage for halls and audio equipment.

In the towns that have booked us amazing things are happening. The Corowa council have offered their main hall for free and in Yarawonga Rotary is helping with costs.

What we do when approached by someone from a town about bringing it there is send them the script, once they have read it they become even more inspired to bring it to their town.
With towns in Queensland, WA and South Australia and NSW’s enquiring we are determined to take this play on the road.

These funds will be used to help make this possible. 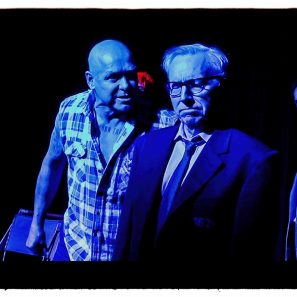 The Wolves Theatre Company is determined to show that mature creatives can be original, challenging and pertinent. We write and produce bold, contemporary pieces aimed predominantly at the 45 plus demographic. The Company was founded two years ago by Michael Gray Griffith and Rohana Hayes who are now joined by a team of creatives and inspiring artists who believe that we should never stop having a voice and getting that voice heard.