We are excited to begin work on the Time for Calm Vol.3 album, a collaboration between legendary Australian cellist David Pereira and Steve Allen on classical guitar. Much like the ABC-commissioned albums Time for Calm, Vols 1 & 2 – collaborations between Steve Allen on Guitar with musicians Riley Lee (Shakuhachi) Vol. 1 and William Barton (Didgeridoo) Vol. 2, we hope to create another album of new Australian music that promotes relaxation, slowing down, improved mental health and enjoyment for the listener.

Steve Allen is a versatile guitarist who completed his BMus at ANU with Tim Kain. His debut CD About Time was selected as CD of the week for ABC Classic – On the Veranda. Steve has shared the stage with many: Slava Grigorian, Riley Lee, William Barton, Tommy Emmanuel, James Morrison. David Pereira has performed all the cello major concert works, as well as premiering many new Australian works, by composers such as Carl Vine, Peter Sculthorpe, Ross Edwards, Nigel Westlake, Elena Kats-Chernin.

Pleasingly, well-regarded Australian composers Richard Charlton and Sally Greenaway have agreed to write music for this album, with other composers in discussion.

Click on the image at the top of the page to hear a 3 minute sample of Albums Vol 1 & 2, to demonstrate the essence of my project. 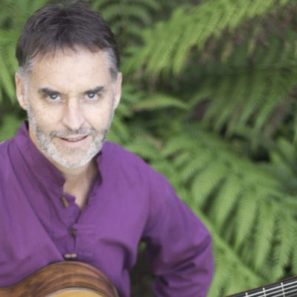 Steve Allen is a versatile guitarist who completed his Bachelor of Music at the Australian National University with Tim Kain.

His debut CD “About Time” was selected as CD of the week for ABC Classic – On the Veranda.