The album has an extra touch of magic with the addition of special guests Abby Dobson (vocals), Mark Harris (bass) and Tiago De Lucca (vocals).

The album, This happy madness! was recorded earlier this year in the main room at Studios 301 with acclaimed Grammy-nominated producer Simon Cohen.

The tracks on the album feature Samba and Bossa inspired music infused with the uniquely seductive Brazilian rhythms that make up the timeless music of Jobim.

This album is set to become a classic favourite with tracks including This happy madness, O grande amor, Sabia – Song of the sea and How insensitive.

So whilst the album has already been recorded, as this is an independently released album, funds are now required for the mixing & mastering process, artwork/cover design, purchase of initial stock and the release of the album at a special launch in Sydney.

Once the album is mixed and mastered and the artwork is designed, the album will be sent off for production and the launch will be organised and held in Sydney in late 2019/early 2020 depending on how soon the target amount is reached! 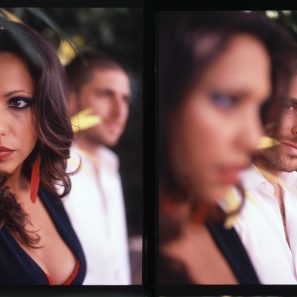 Pianist Ambre Hammond & Accordion virtuoso Marcello Maio have had a 10 year working relationship that has garnered a very strong following for their consistently brilliant and passionate collaboration on music by Piazzolla, Debussy and other Tango repertoire.
Their 2012 release’ Oblivion’ has had enormous success and airplay internationally, and with it rave reviews;

Ambre & Marcello have performed at the National Gallery, Adelaide Cabaret Festival, Noosa Food and Wine Festival as well as the Noosa Long Weekend Festival and are regular guests at Camelot and various special events throughout Australia.