Steamworks Arts new work The Unknown Soldier is a demanding performance work for a female performer that invites us to consider our greatest fears, the experience, ideology and psychology of terrorism and the war against women. The Unknown Soldier has received script development support from Playwriting Australia & Stages WA. A reading was held in Sydney at Performing Lines and another in WA. The Perth Institute of Contemporary Arts has selected the work for its 2015/16 Development program. The feedback from readers has been strong and positive with the text being described as: ‘gutsy, nauseous, disturbing, rich, timely, relevant, contemporary poetic’.

In this development we will explore the interaction between voice, body and sound design, with sound as a key force and presence.

We will look at the structure and framing of the performer/audience relationship, the interaction between live & recorded sound/voice, and alternative sites and audience configurations. Showings will test our choices with invited audience. I intend to shape this work as an intimate, sensory theatre experience, with sound as a key force and presence.

There is a universal & global fear of the Terrorist; who as a force is unpredictable and uncontrollable. Moving beyond the anecdotal, I set out to explore Terrorism as a metaphor where terrorism is not understood as a physical fact but as a social and environmental construction. In other words, ‘we all make terrorism what (we say) it is’ (The Social Construction of Terrorism by Alex Spencer).

Soldiers and terrorists are usually men, and tombs of ‘The Unknown Soldier’ contain remains of a male soldier… The remains are considered impossible to be identified, and so serve as a symbol for all of a country’s unknown dead wherever they fell in the war being remembered. The anonymity of the entombed soldier is the key symbolism…and therefore serves as a monument symbolizing all of the sacrifices. Assuming this ‘title’ is an acknowledgement to the sacrifices of the unknown, unidentified women ‘soldiers’, affected by wars both far and near.

“Female suicide bombers often are “grieving the loss of family members [and] seeking revenge against those they feel are responsible for the loss, [and/or] dishonored through sexual indiscretion.” (U.S. Army Female Suicide Bombers Report, Public Intelligence)

Our long term goal is to premiere the work in Perth,then one or more interstate capitals. We are in contact with a number of companies and several leading festival presenters, with Performing Lines WA well positioned to assist us in securing further development funds and presentations.

See Sally speak about the project here – The Unknown Soldier 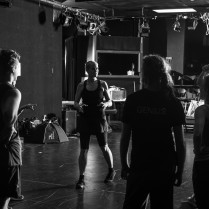 Sally has worked as a writer, director, dramaturg, performer, producer, and lecturer for various companies and organisations including Black Swan Theatre Company, Perth Theatre Company, Deckchair Theatre, Spare Parts Puppet Theatre, The Flying Fruitfly Circus, NICA, NAISDA, WAAPA, Curtin & ECU Universities. Productions of her work have been awarded Helpmann, Green Room, Blue Room, and Ausdance WA Awards and been presented nationally and internationally. As Artistic Director of Steamworks Arts she has created works for circus, contemporary dance, music theatre, puppetry and other hybrids, most recently the award winning Standing Bird 2 which toured to Hong Kong in 2014. She is a past Director of Playworks and Stages WA and was a member of the Australia Council Theatre Board 2001-5. Sally is a core artist with Performing Lines WA and works for Yirra Yaakin Theatre Company. Sally has received an Australia Council Dramaturgy Fellowship, a Creative Artist’s Fellowship from WA Department of Culture & Arts, and in 2014 she received Australia Council funding for skills development in Cultural Leadership. In 2015 she will be undertaking an Asialink residency in Taipei, Taiwan.