THE POWER OF LOVE is our pilot project of immersive theatremaking inside the historic buildings of Sydney.

We’re aiming to raise $40,000 for the exclusive purpose of paying our artists a wage for their involvement in this show. With your help, the hard-work, commitment and brilliance of the entire team behind THE POWER OF LOVE will be remunerated for their work.

Our philosophy is that if we can make this project work during “unprecedented times”, then we’ll be able to make similar work during periods of normalcy.

Currently, the available arts activities in Sydney are sorely lacking in intimacy – and only partly due to COVID-19. Social distancing is making theatre a tough proposition, but it also presents interesting opportunities to craft exceptionally intimate experiences that leverage the amazing talents of Sydney’s vibrant community of artists.

In addition to the opportunities presented by the pandemic, culturally important buildings currently lie dormant – particularly in inner Sydney. We want to bring artists back to work, revitalise hospitality and breathe new life into Sydney.

To do all this, we need your help! We’re looking to raise $40,000 to pay our artists a fair wage for their work. 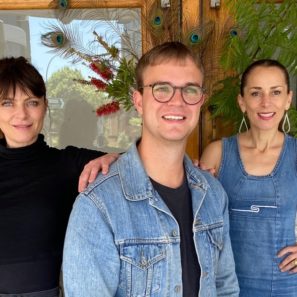 Here Today is an artist led, immersive theatre and business initiative, founded by Amber McMahon and Lucia Mastrantone and directed by Alexander Berlage, combining performance, directing, designing, theatre making and hospitality to create a nimble, responsive offering, defying categorisation. Their mission is to secure dormant iconic buildings under threat of demolition, rent-free and fuse the mutual benefits of an Immersive theatre venue and an Artists’ club

Amber has worked across many disciplines for the past 18 years. She was an original ensemble member of the Sydney Theatre Company Actors Company, and has had an extensive freelance career in Sydney, Melbourne, Adelaide and abroad. She has won two Helpmanns, dances, writes, sings, and has spent a great chunk of her working life developing new work.

Alexander is co-artistic director of the Old Fitz Theatre, recently winning the Sydney Theatre Award Best Direction of a Musical for AMERICAN PSYCHO in 2020 and CRY-BABY in 2019. As a lighting designer, Alexander’s work has lit the stages at Sydney Theatre Company, Belvoir, and Birmingham Royal Ballet.