Inspired by infamous chemical attacks in Douma (Syria), set in Melbourne, The Pale King explores an impact of modern warfare on one’s mind through three characters; a Syrian teenager, a veteran war correspondent and an emerging journalist.

Our project represents modern-day Australia in front of the camera and behind it. The story is anti-age-discriminatory, multilingual with characters coming from diverse backgrounds (Afghani-Pakistani, Greek, Zimbabwean, Swiss and Australian). Our crew is International and inclusive of people from all cultures, creeds and sexual orientations.

We are using the trope of the contemporary psychological thriller (think Childhood of a Leader) to raise awareness of post-traumatic stress disorder, predominantly exploring the impact on women. The film aims to connect its audience to the lives of innocent civilians caught in conflict.

What happens to people who cannot leave? How do we treat those who had to flee?

Jake Simkin, the associate producer and DoP of the film worked closely with documentary makers Waad Al-Kateab and her husband Hamza, while he was volunteering with White Helmets in Aleppo, and the tonal inspiration for this part of our story is coming from Waad’s feature-length documentary “For Sama”.

“The script was inspired by my friends and family who have been working in war zones as journalists, medical professionals or soldiers. Throughout the years I witnessed their struggle with the career they chose. Some of them were able to rebuild their lives, others succumbed to addictions and depression.”  – Stepanka Cervinkova (Director / Writer)

What Are We Going To Use The Funds For?
We are raising funds to complete post-production of the film.
Your generous contributions will allow us finish the film and get it to the audiences world-wide.

Before turning to directing Stepanka worked in camera departments on local and International TVCs for companies such as Qantas, Mattel, Sunsuper, Ozito, Origin or Skoda.

In drama Stepanka worked as a camera operator on feature length films Measure For Measure (MIFF 2019) and No Time For Quiet (MIFF 2019). Her credits also include work in camera departments on acclaimed ABC shows The Katering Show 1 & 2, and an award winning feature film Pawno.

In 2018 Stepanka has been awarded scholarship to attend a directorial workshop with Cristian Mungiu (Palme D’Or winner, 4 Months, 3 Weeks and 2 Days)

Stepanka’s short film The Body Corporate (2018)  premiered in Las Vegas. It has been enjoying a successful festival run since then (Berlin Final Girls Film Festival, Melbourne Women in Film Festival).

Jake Simkin has worked as a war photographer for many years before he returned to Australia. He worked for most of the International magazines and media outlets.

Ask Us
Please do not hesitate to contact us with any questions about the project.
You can contact us via facebook fb.me/thepalekingshort film
Thank You For Your Time
Stepanka Cervinkova & The Pale King team 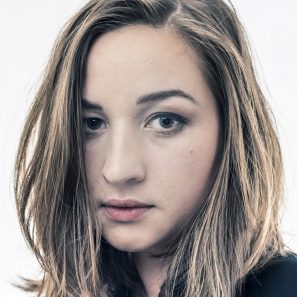 Stepanka is a recipient of George Paton Gallery Residency Art Grant and UMSU Arts Grant. Her work has been exhibited at Acmi Melbourne, Neon

After a year of learning from the people we work with, we have recognized that there is a serious and prevalent issue about women's health and burnout in the creative industries. Donations to our Australian Cultural Fund will be tax deductible with donations of $2 or more.