I have been working on an album that’s very diverse in tone and structure, but nearly every track tells its own story. It is for this reason that I am hesitant to release any of these songs without a video to accompany it. With over 20+ songs that could possibly make the cut, (3 that have been released & 7 that are definitely on the album) my plan was originally to release 1 song per week until completion. However, this platform has given me hope and widened the scope of my vision.

Think, Beyoncé’s visual album but closer to the storytelling of Joyner Lucas‘s, “Ross Capicchioni” and you have the core of the project. But then consider the weekly release schedule and the possibility of episodic, narrative driven visual pieces and you basically have a TV show. That’s what my vision is here. I want to take the stories that already exist in my lyrics and then expand upon that in a way that most Melbourne artists haven’t done before.

I believe in the content of the music since we touch on important topics like Mental Health, Toxic Masculinity, Grief, Self-Doubt and more. But I believe the music is a foundation for visuals that will amplify our overall message.

I also believe in representation. As a child, Scribe and Dwayne Johnson showed me Polynesians could do anything. At this point, I represent not just Poly Youth, but all second-generation immigrants surviving in post-colonial Australia. I represent young fathers with a dream, fighting an internal struggle not give up and do it for their family. I also represent Independent Artists saying no to the industry, choosing creative freedom over currency.

Furthermore, this project will help refuel our creative industry, as well as endorse Melbourne’s talent through collaboration with a different film crew per video to show off our incredible filmmakers/photographers. I also want to give roles to new, upcoming models/actors from our city.

Donations will be used to hire crew members, equipment etc. This includes the Director, Videographer, Sound Engineer, as well as any Models or Actors. We would also like to hire a Stylist and Hair/Makeup but those are optional. We will also require the services of a Location Scout, and need to cover possible venue hire.

We’ve determined that a project this big will require a Lawyer for contracts and artist agreements. This will help cover that cost to ensure that the project follows ethical/safe practices.

Any graphic design made for both the songs and music video as well as any additional costs to finalise the actual tracks for the album (e.g. Producer/Engineer costs).

We plan to set aside a percentage of the budget to cover the cost of promotion (we will be partnering with a PR organisation to handle this). We also have ideas for related merchandise but that’s optional and not a key focus. 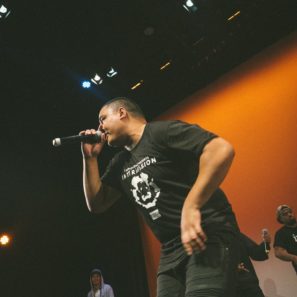 Damon Paraha, better known as Nomad is a songwriter, spoken word & Hip-Hop artist from Melbourne’s west who has been a performing and independent artist since 2016.

Starting with the release of his mixtape, “The Fixtape Vol. 1”, with the help of Producer and eventual Co-Founder of the Movement RC, IconicBeats (A.K.A. Peter Maglogiannis), Nomad’s career has been on a steady incline with Music Victoria recently confirming him as 1 of 5 Nominees for Best Hip-Hop Act (other notable nominees being Sampa The Great and Jordan Dennis).

In 2019, Nomad would perform at St Kilda Fest as a Grand Finalist for the Push Inc’s, “Push Start” competition, where he would receive an APRA AMCOS Songwriters award for his efforts. Later in the year, he would join the GRID Series’ – Deep West program, culminating in the release of his powerful anthem, “Destined”, one of his most critically acclaimed songs to date. Later on, while in partnership with Wyndham City Council and All The Queen’s Men, Nomad would team up with Fatima Measham to write and deliver a speech about equality and feminism for 2019’s, “CONGRESS” event. He hopes to continue his push as an artist while continuing his work in the community.

Firstly I just want to say thank you to everybody who has donated to the campaign already. More info soon, but just wanted to say Merry Christmas and Happy New Year!

PALMS is a shared studio and workshop that provides affordable, non-precarious facilities for womxn* and gender diverse artists to make their work. This is the 2nd year in a 3 year plan for establishing PALMS.