Following successes in 2016/17, the music box project has big plans for the year ahead. We’ve already kicked off our 2018 season with Photoplay – new music for new experiments in silent film – and launched a call for submissions for a text-based score anthology, project: anonymous. Our regular Upstairs @AYH series is underway and in June we’re taking up residence at Legs on the Wall in Lilyfield for a week of Playshop – experiments in music, sounds and creative installation.

Looking further ahead, we need your help to realise our goals for late 2018 and next year. In 2018, this includes launching a limited run of our text-based score anthology, realising an exciting new commission for soprano, theremin and ensemble by Jaslyn Robertson, recording the intriguing sounds we made as part of Photoplay, and paying artists for their role in curating Upstairs @AYH. We’re also looking forward to 2019, with plans to commission new works by up and coming composers Elizabeth Jigalin, Joseph Frankin, Jasmin Leung and David William Murray.

As an ensemble, we are strongly committed to supporting early career artists and to the creation of new works. We are always ready to experiment, be it with the location of our performances or the very nature of what makes a piece of new music. This is evident in our very earliest projects including in 4, along with Photoplay, our current exploration of improvised soundtracks to silent film. Our plans for upcoming projects show that we’re continuing to develop as performers and collaborators, with plans to explore new performance spaces and broaden our ability to commission works.

Donations will go towards taking the music box project to the next level of our creative practice. The majority of funds raised will be put towards commissioning, allowing us to develop new and exciting relationships with composers, along with supporting individuals within the ensemble to create new works that are specifically tailored to our unique line-up. A major goal in our 2018 programming is to create work with a life beyond the initial performance. We plan to record live and studio versions of our Photoplay film soundtracks, while project: anonymous will be performed live in Sydney bookshops and then released as a limited-run printed booklet of text-based scores.

Our online creative space is http://www.themusicboxproject.com 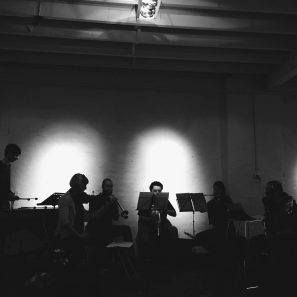 Open the music box…who knows what you might find. ‘the music box project’ is a curious collective of early career musicians presenting creative, community driven and collaborative musical experiences. Increasingly recognised as keen collaborators and instigators of creative music making, the music box project has premiered works of local, national and international early career composers whilst continuing to re-invent established works in a new light.

2018 sees ‘the music box project’ continue a casual performance residency at the Australian Youth Hotel – presenting music outside the usual order of things, curating volume 1 of an anonymous text-based score project and a week-long residency ‘playshop’ in late June.

Other highlights include: creation of an ambitious collaborative work between 40 composers ‘in 4.’ (2015), opening for New York ensemble yMusic and collaborating with Sydney’s Splash Percussion (2016), and participating in an open workshop/performance with Grammy award-winning ensemble Eighth Blackbird (2017).