This is an exciting opportunity to support the development of the feature film The Handkerchief, an adaptation of the widely renowned true story following Jan Ruff O’Herne’s fifty-year journey to find the courage to speak out against her transgressors and seek justice for the thousands of women forced into sexual subjugation as ‘comfort women’ during WWII.

Jan’s granddaughter is Writer and Director, Ruby Challenger and The Handkerchief is being developed off the back of Ruby’s hugely successful short film Daily Bread, also based on Jan’s memoir, which won the St Kilda Film Festival Audience Choice Award and has screened in competition at the Austin Film Festival, the Official Selection of the Flickerfest International Short Film Festival and numerous festivals worldwide.

The feature film is based on Jan’s incredible personal memoir 50 Years of Silence and the AFI Award winning documentary of the same name by Ned Lander and Carol Ruff and will be produced by Anwyn Watkins (film credits incl. The Great Gatsby, Lion).

Jan’s idyllic childhood in the Dutch East Indies came to an abrupt halt when she was interned in a WWII POW camp in Ambarawa and later forced into prostitution in a military brothel for officers of the Japanese Imperial Army. The Handkerchief weaves this timeline concurrently with 1949 England and 1991 Australia to create the fabric of one woman’s story.

This is a highly significant story with a global reach that has been the subject of multiple current affairs programs including two episodes of the ABC’s Australian Story. The film is more relevant than ever to today’s audience with the swelling movement to tell stories surrounding violence against women. The film draws a parallel with the Me Too movement which revealed the astounding magnitude of previously untold accounts of sexual harassment and abuse. It salutes the women who disclosed their stories and acknowledges that the fight is not yet over. 70 years later, the ‘comfort women’ are still waiting for a just resolution to rectify the wrongs of the past, a past which we still have much to learn from.

The feature is currently in development and we are looking to raise funds to cover a script editor, writer’s room, historical research, initial work with a dramaturg and dialect coach, local and interstate location recces pending COVID state border closures. This round of funding will help us move towards polishing the script and putting together a package to secure production investment as well as casting and building a dream team of highly skilled crew.

We have already had interest from ANZ distributors and Create NSW has shown support for the proof of concept Daily Bread, awarding the project a travel grant for the creatives to attend the 2018 Austin Film Festival, where the short film made it to the final round in competition.

Daily Bread is a solid proof of concept which gives an insight into the director’s vision for the feature. To view the short film Daily Bread, visit the gallery above.

We look forward to bringing The Handkerchief to a screen near you soon and thank you for your support. 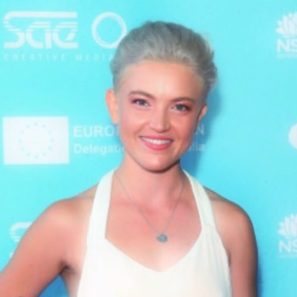 Ruby Challenger is an emerging Australian film producer and director. Her first short film, Daily Bread, a World War Two period film set in a prisoner of war camp in Indonesia, had its World Premiere at Flickerfest 2018.

She has worked for the last decade across both Art and Costume departments, often in the roles of Art Director (What If It Works, 2017), Production Designer (Old Spice commercial with the Bondi Hipsters) and Costume Designer (Timothy, ABC 2014) and worked with clients such as Colgate, Kleenex, Sydney City and Wild Turkey.

Challenger has also had three sell-out solo exhibitions of her landscape paintings.

With a background in fine art and fashion, Ruby takes inspiration from a variety of visual sources to inform her filmmaking, as well as a deep passion for telling stories that tap into the universal human experience.

Help mezzo soprano Olivia Sanders Robinson secure her place in an Operatic Masters at The Royal Northern College of Music. This exciting opportunity will help Olivia take the next step in her musical career.

In this satire, seven students at a prestigious law school crumble under academic pressures, battle it out for the top internships and struggle to get ahead in a nepotistic industry.

In response to the devastation wreaked by COVD-19, Artist Relief Fund WA will help cover bills and essential medical and mental health expenses for people with careers in the live performing arts in Western Australia.