Currently having finished principle photography we have now entered post production and are seeking your support. This would provide us with the opportunity to market and distribute the film in addition to finishing different segments of animation that are within our film.

Future managed to overcome many hardships and adversity to not only live but thrive in Australia after fleeing from the Congo. His insprational story shows that no matter the stuggles you face, you can achieve anything that you put your mind to through hard work and dedication.

Your donations will be used to help us through the post production stage of TGBLW and also fund the marketing and distribution of the project. This production is a very powerful story which we believe can leave make a lasting impact on audeinces.

If you would like to keep updated on our progress, please follow our social media! Any contribution is highly valuable and all is 100% tax deductible. 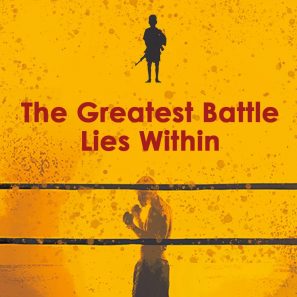 The Greatest Battle Lies Within Production

Gerard Wilkie – Producer:
Gerard Wilkie is studying a Bachelor of Fine Arts Film Television and New Media with a dual degree in Business at QUT. His passion for filmmaking began at an early age and has continued through to the present. During school Gerard had the opportunity to partake in a film program which gave him the opportunity to learn elements of film which has now bettered his knowledge as a producer. Throughout his degree, Gerard has had the opportunity to work on multiple TVCs including; QUT’s 2017 TVC real World Series, RACQ Bank Paypass TVC and Brisbane Festival 22 Days of Wonder TVC. With plans to become a producer in the film industry Gerard takes on any challenge, whether that be as an associate producer and 1st AD on the 2018 3rd year end slate or simply being a film student managing a part time job, duel degree and epilepsy. A condition which drives him rather than stops him to create content. Ready for the challenge of this production Gerard is keen to push his crew to create a documentary which tells the story behind Future D. Fidel.

Patrick Moroney – Writer:
Patrick Moroney is an up-and-coming artist within the Queensland entertainment industry. Having entered his final year of Fine Arts (Film & TV) at Queensland University of Technology, he conceived “The Greatest Battle Lies Within” in response to being wowed by “Prize Fighter” and hopes that by serving as its writer, he will pay a memorable tribute to the show and Future himself. Aside from this documentary, his experiences within the industry include serving as an extra in Luke Sparke’s “Occupation Rainfall”, training with the Queensland Theatre Company’s Youth Theatre Residency, and participating in a short film course with Michigan State University.

Connor Price – Director:
Connor has been an active member of the film community for more than five years now. During this time, he has continually sort to grow his network of potential clients and collaborators. This has led him to work on a range of different productions from feature films, to short narratives, and corporate videos. Always trying to create new content and learn different film making techniques, Connor is always searching for new and exciting productions and plans to create a visual and dynamic documentary about Future D. Fidel.

Dear Donors the team is working harder than ever on the film and in the coming months it will be ready to screen. We cannot wait to share this story with you. Check out FB and Instagram for Updates

Because of your dedication and support, we have exceeded our donation goal by 14%! Thank you all, and we will keep you updated as to where we will take this film next.

We Are Almost There

The Greatest Battle Lies Within is 71% funded. This would not be possible without our incredible donors. Thank you for your support, we are almost there.
However this story is not over. – Gerard

Special thank you to Phoebe Hart for contributing to our production! Without your support this film would not be possible! – Gerard

Special thank you to Greg Wallace,
You donation has helped bring this film to frution and all the team are really excited to share Furture’s story with you!! – Gerard

Special thank you to Helen McCarthy,
You have helped made this production possible and we cannot wait to share it with you! – Gerard

Special thanks to Kerry Gillett for contributing to our production! Without your support this film would not be possible!! – Gerard

Dear Donors, thank you for the support of this production. We are all really excited about sharing this story with you and can’t wait to see it to frution. Look out for updates – Gerard