I am a lyric tenor from Melbourne, born in India. On my family’s insistence that I get good training for a ‘sensible’ career in IT, in 2002 I relocated to Australia to commence a bachelor’s degree at Charles Sturt University in Wagga Wagga, NSW. I have sung for as long as I can remember and find it to be an integral part of my expression as a human being. What no one realised at the time when I was training in IT was the great potential I have as one of the rarest operatic voice types.

It took a while for me to find opera and for opera to find me. I began as a lead vocalist in heavy metal bands and released three studio albums over 8 years. During this time, I explored the classical singing style and was quite surprised at how naturally it came to me. In August 2012 I relocated to Melbourne and began training as an Opera singer.

Entering the world of Opera relatively ‘late’ made it difficult for me to enter youth programmes and competitions. Thus far my training has remained self-funded and I have worked with some of the best coaches in Australia as well as with reputable international figures; Daria Masiero (Italy), Gianluca Terranova (Italy) and Joshua Hecht (USA).

I have had some extraordinary opportunities despite my lack of formal training and have built a solid reputation on the concert platform. I am now in the situation where to move to the grand opera stage, I require training aimed specifically for singers at the ‘early professional’ points in their career.

My acceptance at the Wales International Academy of Voice under the directorship of Mr. Dennis O’Neill CBE provides me with just this; it is an opportunity offered to only a handful of singers each year from around the world and there is nothing like it in Australia – or the world. Outstanding Australian singers like Greta Bradman and Siobhan Stagg have trained there.

I also regularly perform in high profile opera concerts; Opera in the Alps, Opera in the Market (2016 – with Greta Bradman and Teddy Tahu Rhodes), Opera in the Park (2015 – with Cheryl Barker and John Bolton-Wood AM), Opera By the Lakes (2015-16 – with Marina Prior and David Hobson), Opera in the Q (2015), Werther (title role) – Lyric Opera of Melbourne (2014) as well as at numerous private functions.

My time at the WIAV will allow me develop and showcase my talent to some truly influential people in the Opera industry on a global level and I am confident that by the end of it I will be ready for the world stage and will promote the multicultural face of the Australian opera industry. 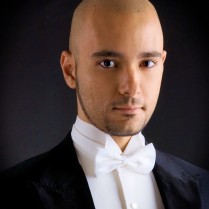 Shanul is fast becoming recognised as one of Melbourne’s most exciting young tenors.

Born in India, Shanul launched his singing career as a lead vocalist for heavy metal bands releasing three studio albums and fronting major national tours over 8 years. Concurrently he explored the classical singing technique as a stylistic expression for his music and in late 2012 relocated to Melbourne to commence his classical singing studies and pursue this art form.

Shanul has since appeared regularly on the concert, recital and theatrical stages. During 2014 he made his operatic debut as ‘Don Ramiro’ in Rossini’s La Cenerentola adapted for Opera Australia’s Victorian schools tour and was later engaged to sing the titular role of Massenet’s Werther with the Lyric Opera of Melbourne.

During 2015 Shanul joined Cheryl Barker, John Bolton Wood and Sally-Ann Russell as a featured artist at Stonnington’s ‘Opera in the Park’ and Marina Prior at Gippsland Opera’s ‘Opera by the Lakes’. He sang as a featured artist with the Penrith Symphony Orchestra at ‘Opera in the Q’ under the baton of Paul Terracini, and also took part in Opera Australia’s month long season of Aida on Sydney Harbour.

2016 has already seen Shanul as a featured soloist at the annual ‘Opera in the Alps’ and ‘Opera in the Market’events, alongside Greta Bradman and Teddy Tahu Rhodes under the baton of Guy Noble. He joined David Hobson at his second ‘Opera by the Lakes’ in March and will star in ‘Canzoni Di Mio Padre (Songs My Father taught me)’ at the Melbourne Recital Centre as part of the annual La Dolce Italia festival in May.

During this time he will also make his oratorio debut with the Frankston Symphony Orchestra as the tenor soloist in Mendelssohn’s Elijah.