Intimate chamber music recitals of this type provide a unique and “up-close” listening experience for audiences, professional performance opportunities for the artists taking part, as well as professional fees and publicity for the artists. As independently-run events, they constitute a vital contribution to chamber music in venues outside the established big companies, arts centres and tertiary institutions.

Donations for any amount are accepted gratefully and will assist the Team in continuing to provide quality chamber music presentations in intimate venues. Apart from obvious costs such as artists’ fees, venue costs and promotion, donated funds may be applied also to items such as domestic airfares, piano tuning, programme copying, APRA performance licences, postage, or to enable the Team to engage one or two extra performers for works requiring more than two or three musicians. 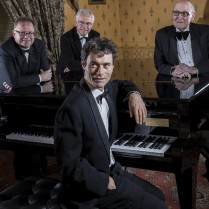 The Melbourne-based Team of Pianists has captivated audiences in Australia and overseas for more than twenty years. Acclaimed for artistry and professionalism in its many solo and chamber recitals, concerto performances, CDs and broadcasts, the Team is also committed to encouraging and promoting young musicians through masterclass programmes in metropolitan and regional areas alike. The four partners are Professor Max Cooke OAM, Robert Chamberlain, Darryl Coote and Rohan Murray.

The Team has produced nine CDs covering a wide range of music, including a number of exciting, yet rarely recorded works, as well as two innovative videos and various publications on the art of piano playing and musicianship.

The members of the Team are Artists-In-Residence for the National Trust of Australia (Victoria) at Glenfern, the National Trust‘s Centre for the Arts and Culture, in East St Kilda, where they present educational programmes including the annual Spring Piano School, professional development events, an annual Piano Marathon at Rippon Lea in late summer, as well as masterclasses by Australian and overseas artists.

Some season 2020 recitals postponed due to corona virus shutdown

Due to the corona virus shutdown, some recitals have had to be postponed to later, as yet unknown dates. Please see details at www.teamofpianists.com.au . Thank you everyone for your support.

We will professionally record, mix, master as well as create promotional assets associated with releasing an EP under the moniker Obscura Hail.