Tales of a City by the Sea is the story of two people who meet and fall in love in the besieged Gaza strip, woven together from the actual experiences of people living under occupation.

Jomana, a Palestinian woman living in a Gaza refugee camp, falls in love with Rami, an American-born Palestinian doctor and activist who has just arrived on one of the first Free Gaza boats in 2008. Their love is met with relentless string of challenges. Ultimately, Rami must decide between returning to his comfortable life in Texas and staying in Palestine with Jomana. Choosing to stay means leaving his family and career behind for a life ravaged by war, while leaving means not only losing Jomana but also ignoring the plight of the Palestinians.

The play premiered in November 2014, with simultaneous productions at La Mama Theatre in Melbourne and the AlRowwad Cultural and Theatre Society, in Aida Refugee Camp in Palestine. La Mama saw a sold out season and both productions received passionate responses from audiences and critics alike. Hundreds posted on social media, encouraging their friends to see it and asking for remounts in other places.

Beginning with a three-week season at La Mama in Melbourne (where the production has been selected for the Victorian Drama Studies syllabus!), Tales of a City by the Sea will go on to play at the Bakehouse Theatre in Adelaide and Casula Powerhouse Arts Centre in NSW. We have three great venues and huge community support in each city.

But we need your help!

Tales of a City by the Sea is about what it means to leave home to create a life in more tolerable conditions, and what it means to stay. It is about relationships between parents who have chosen to leave, and children who want to return. It is about how people in diaspora see their connection to home, and how people at home see them. It is a Palestinian story, but more broadly it is a migrant story that speaks to the experiences of many of us in this country.

Our production features a cast and crew with roots in Palestine, Lebanon, Iran, Iraq, Poland, Malta, Italy, Egypt, and Chile. Supporting this production means helping to the diversity of Australia represented on the Australian stage.

We believe that sharing Palestinian stories is a key step towards a just and peaceful resolution, and that a view into the realities of life under occupation has the power to change hearts and minds.

“This gripping play is an act of resistance that implores its audience to take heed.”
— The Age 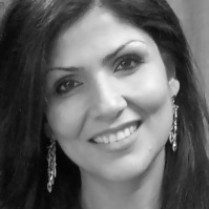 Samah Sabawi is an Australian Canadian poet, playwright and essayist, originally from Palestine, now residing in Australia. She has travelled the world and lived in its far corners, yet always felt trapped in her place of birth, Gaza. The war torn besieged and isolated strip shapes her understanding of her identity and her humanity.

Sabawi has written and produced the plays ‘Cries From the Land’ (2003) and ‘Three Wishes’ (2008) both staged successfully in Canada. Her third play ‘Tales of a City by the Sea’ enjoyed a sold-out world premiere run last year at Melbourne’s La Mama Theatre, and will be staged in three Australian cities in 2016. The play was selected for the Victorian Certificate of Education drama and theatre studies’ 2016 playlist and will be published by Currency Press.

Samah Sabawi is co-editor of ‘Double Exposure: Plays of the Jewish and Palestinian Diasporas’ for the Playwrights Canada Press. She is also co-author of ‘I Remember My Name’, an anthology of poems by three poets from Gaza, ‘Palestine’ (Samah Sabawi, Ramzy Baroud and Jehan Bseisou) edited by Vacy Vlazna and published by Novum Publishing.

Sabawi has received an Australian Postgraduate Award to undertake a PhD by Creative Project at Victoria University commencing 2016.

A music project featuring stories by women for women around the world. They are real experiences of women who have overcome abuse and sexism, who take their lives back towards happiness. Advocate for equal rights!