We are seeking funds of $1500 to make up the shortfall after not receiving a grant from ArtsACT. Our original operating budget was $11, 000. After not receiving the grant, we cut it to $6000 by eliminating the live musicians in favour of backing tracks, and removing the payment to our Composer in Residence. Both these actions, while necessary, were hugely disappointing. Receiving this money from the ACF would mean that we could pay for high quality backing tracks to be made, and we could restore the payment to our composer.

‘Still, We Rise’ will be performed by the 14 young members of the AVC, and is a multimedia presentation including choral works, purpose-written music, and projected video. We present a story of hope, protest, and change, about recognising social and world problems and standing up against them.

The creation of the work was Inspired by young, global influencers for change who have spoken out tirelessly against social and global injustices against the greatest of opposition. The message is that every voice, no matter how small, can make a change, and how young voices when united are unstoppable.

Incorporating music, spoken word and short film, ‘Still, We Rise’ is an engaging and dynamic work. Existing songs have been selected that represent different aspects of the emotional narrative, including new composition ‘Seeds of Change’ by Canberra composer Chloe Sinclair, commissioned by AVC specifically for the show.

We really want to be able to provide our audience with a high-class show, despite having to cut back on the live musicians. Receiving this money would mean that we can pay for backing tracks to be custom made, and we can provide a small payment to our composer in residence who, so far, has donated her time. 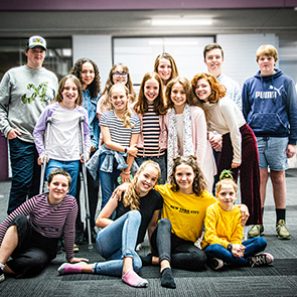 The Australian Voice Collective is a new kind of singing and performance ensemble for young people aged 10 to 25. We are breaking the mould of “children’s choir” and have created something that’s as fun to be a part of as it is to watch.