For 25 years, a locked cupboard sat in a family garage. So what was inside?
A “Fighting Gunditjmara” man returns home from war only to be forced from his traditional lands. What drove him to fight for a country that didn’t recognise him as a citizen?

Starring award-winning ABC presenter + performer Joel Carnegie and acclaimed Gunditjmara actor Tom Molyneux, Stardust + The Mission are two stories tracing the true stories from our family ancestors to uncover who we are today.

In 2021, the production will tour to 18 venues across metropolitan, regional and remote WA, NSW, Victoria and Tasmania (after touring to 13 venues across Victoria in 2019).

A key aspect of the production is that we will rehearse and perform with each town/city’s brass band, with local musicians performing as the production’s ‘on-stage’ band.

With your support, we will be able to provide a professional performance and learning experience for musicians in 18 bands across metropolitan, regional and remote Australia.

The creative team will first develop online (Zoom) relationships with band leaders from each brass band. Pre-recorded instructional videos will be distributed, which will introduce band members to the show, with sheet music also sent in advance. The production’s musical director, Joel Carnegie will lead the band in a series of online & in-person rehearsals, as well as in performance.

Together the performers and brass band will present the raw, joyous and heartbreaking stories of two men (one Indigenous, the other non-Indigenous), whose legacies were previously thought lost in time. Each band plays an essential role in capturing the nostalgia of the time period and celebrating our ANZAC soldiers.

Stardust + The Mission is supported by Creative Partnerships Australia’s ACF Boost program –  donations to this campaign will be matched dollar for dollar up to $3,000. Funds raised through the Australian Cultural Fund will go towards supporting new musical arrangements, backing tracks, videos to support the brass band in their learning, and artist fees.

All brass bands involved in the 2019 Victorian tour “recommended the experience to other bands” – providing comments in the post-show survey like:
– “The show is one of great quality and deep beauty” (Healesville High School Band)
– “Being part of a theatrical production was new to all of us. The Mission gave us all a much greater perspective and appreciation of Indigenous soldiers” (Ararat City Band)
– “Joel was fantastic to work with” (Portland Citizens Brass Band)
– “Players felt PROUD after the show” (Hamilton Brass)

Working with each brass band was also a deeply meaningful experience for the creative team. With your support, we believe that the show will again have a similarly profound impact on the 18 bands (150 brass musicians) involved in the production’s national tour. 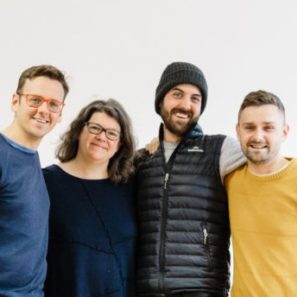 As a collective of artists and creative minds making theatre productions, The Space Company’s mission is to create stories that offer up a mirror to our changing world, as a challenger of the status quo.

The Space Company’s most recent production is “Stardust” + “The Mission” which toured in 2019 as a double bill to 13 metropolitan and regional venues across Victoria, with the support of Creative Victoria, Regional Arts Victoria, the Geelong Arts Centre and the City of Greater Geelong.

“Stardust” tells the story of a jazz musician and a cupboard of locked secrets, “The Mission” tells the story of an Indigenous Australian soldier at war – both at home and abroad – who left little behind. The stories are connected through a shared investigation – tracing the stories of our ancestors to uncover who we are today.

This production is now slated for national touring in 2021, with other new works also in development.

Double the value of your donation! Thanks to Creative Partnerships Australia’s ACF Boost program, every dollar you preference to this campaign will be matched dollar for dollar up to $3,000.

Update on Stardust + The Mission

Thank you so much to all who has helped us achieve our target of $4000. Any new donations received in the last days of our campaign will go towards supporting our artists and the making of the show.

Update on Stardust + The Mission

We’ve been so blown away by the support for Stardust + The Mission. With a new fundraising target of $4000, please consider a tax-deductible donation and join us, as we work towards our national tour!