SQUASH! plays with notions of vulnerability, measures of success, ego, macho-ism, dignity and constant scrutiny through a live performance that exploits conflict, aggression, personal boundaries and power relations, within a feminist perspective. Fast-paced and unapologetically violent, players inhabit mutual space in a bizarre cavort of politeness, tension and aggression.

We are seeking funds to support the final presentation of the work during the Festival of Live Art, March 2018.

Artist, Meg Wilson, will assume the persona of WILSON – an egotistical squash-playing athlete – who will challenge opponents in four hours of continuous play at the Melbourne City Bath squash courts. Her opponents are festival-goers who sign up to battle WILSON. Absurd penalties are to be enforced by a carefully selected crew of artists as provocateurs who aim to disrupt play, manipulate outcomes and influence the overall atmosphere. Think glitter canons, dance SQUADs and EPIC CHAOS!!

This is not a simple squash tournament. This is a LIVE EXTRAVAGANZA that is set to be an explosive and immersive experience of a lifetime for participating audiences. This is Meg Wilson’s third work in a series of performative installations that explore the representation and scrutiny of the female body and persona in highly public environments. The action is largely reactionary to events and circumstances that will unfold throughout the course of the endurance event.

Meg’s practice has gradually progressed from the creation of large-scale textile installations, to design for theatre, to creating theatrical works that test internal and external boundaries. SQUASH! is an experimental process that relies heavily on creative collaborations. It is much bigger than anything she has ever attempted. The project requires a huge amount of coordination and planning and a very large creative team. Meg is seeking donations to ensure that her team can be paid appropriately.

Meg will be joined by an entourage of exciting collaborators from SA and VIC, whom are at varying stages of their careers.

VOLUNTEER/ADMINISTRATIVE COORDINATOR: Gemma Beale (SA)
SQUASH! is to be presented by Arts House for the Festival of Live Art (FOLA), 2018.

You too are encouraged to be part of the action. Be an opponent! Join WILSON’s SQUAD! http://www.artshouse.com.au/events/squash/ 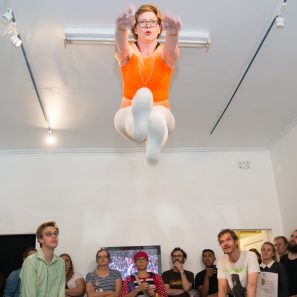 MEG WILSON is an Adelaide-based interdisciplinary artist who works predominantly with large-scale and often site-specific installation and performance.

She aims to provoke imposed perplexity, uneasiness and a sense of drama in the everyday, through explorations of performativity of space and audience encounter with the ordinary, within the context of the out-of-the-ordinary.

Meg has exhibited independently with BLINDSIDE, VIC; Constance ARI, TAS; and Fontanelle, Nexus Arts, FELTspace (SA) and has created public projects for FELTspace (SA) and OSCA (SA). She is a former co-director of FELTspace ARI. Meg regularly works with performers Ashton Malcolm and Josephine Were.

Recent works include You Will Only Ever Be Any Good if You Can Run the Marathon at the Contemporary Art Centre of SA (2015), Team Trampoline (FELTspace, 2016), Sometimes I…, a performance in development for teenage girls, and SQUASH! which was developed during Adhocracy at Vitalstatistix, 2017 and will be premiered in 2018. 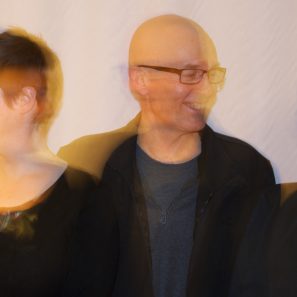