By supporting this project, you will help to inspire audiences young and old, indigenous and non-indigenous to the beauty and custodianship of the land, and the importance music plays in passing down stories from generation to generation.

$118,00 has been raised by way of arts funding and production company investment for creative development and to commence production. A further $65,000 is being sought in donations to complete the work. Funds raised will cover artist fees, music production costs and ground breaking exploration of the latest VR technology.

William, a Kalkadunga man, collaborates with close friend, ASQ violist Stephen King. Together they co-direct this work which is inspired by William’s ancestral song lines of the Mt Isa region. Williams composition will be brought to life in a stunning visualisation focusing on the elements of water, fire, earth and sky.

The Virtual Reality (VR) work is being created by Adelaide based Jumpgate VR, a leader in this field. The music was recorded at the Ukaria Cultural Centre as part of the ASQ’s Quartet and Country program. The VR project will have its world premiere at the inaugural Adelaide winter arts festival “Illuminate” in July 2021. It will be presented in a walk-in immersive space with dazzling CGI imagery to the soaring music by William and the ASQ.

The project has received funding support from the Adelaide Film Festival and the Illuminate Festival – who will jointly present it.

The work is also being supported by the South Australian Museum, who have an enduring relationship with William. Following the festival the work will form part of their annual programming and will be toured regionally and in major cities, schools and libraries, ensuring the broadest possible audience education and engagement.

Vital funds raised will contribute to a visually stunning ground breaking work expanding the creative reach of the artists and bringing the music to a wider audience.

Please watch the accompanying short film WILLIAM BARTON & The ASQ’s JOURNEY TO VR. Two images from the VR look book are included in the image gallery.

Donations over $2 through the ACF are tax deductible.

The creative principals for the VR project are: 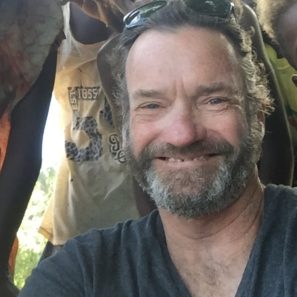 He produced Race to London (2012) a six part documentary series for ABC 1 following 3 Olympic and Paralympic hopefuls with director Kay Pavlou and the ﬁrst official Australian/Chinese co-production Dragon Pearl (2010) with director Mario Andreacchio. Recently Mark was one of the producers on the feature film Cargo (2017) starring Martin Freeman and is the Executive producer for the new music organization Soundstream.

Mark was Manager Film Development with the South Australian Film Corporation and Film South (1990-1994) and the Executive Producer of Government Documentaries (1995).