“There is little to compare to the depth of sound coming from an ensemble like this in full flight, and this one is world class’. (Rob Kennedy, Review, Canberra City News, 25 March 2019)

‘Sound the drums and ring forth the trumpets’ is the title of Bach’s Cantata BWV 214, composed in 1733 to celebrate the birthday of Maria Josepha, Princess Elector of Saxony and Queen of Poland. This performance will mark the 20 year birthday of the Canberra Bach Ensemble, and will see the orchestra and choir of the CBE team up with the baroque trumpets of Australian Baroque Brass. Presented alongside Bach’s two settings of Mary’s song of praise, the ‘Magnificat’ and ‘Meine Seel erhebt den Herren’, the musicians of the CBE will give voice to the Queen of Heaven and a Queen of Earth.

Canberra’s own dedicated Bach Ensemble was founded in 1999 by Andrew Koll, an Australian conductor and Bach scholar. For over 20 years Andrew Koll has been promoting the music of J.S. Bach in Canberra, Melbourne and Sydney through concerts, seminars and audiovisual presentations. Based around a multi voice choir and orchestra, the Ensemble performs with period instruments and presents historically informed programs.

Their work has received positive critical acclaim, and they are honoured that they have been invited to perform at the 2020 Leipzig Bachfest. They will be representing Australia at this significant and highly regarded festival, which in 2020 has the theme ‘We are family’.

The Canberra Bach Ensemble has a strong level of audience support, but the costs of staging concerts on period instruments are significant and cannot be completely financed through ticket sales. For this concert there are extra travel expenses associated with bringing in specialist players from interstate.

The CBE performance at the 2020 Leipzig Bachfest will require a substantial financial input from the individual players and choir members. Some costs, such as airfares, need to be paid in advance, and not all costs will be remunerated by the Festival.

The CBE is seeking financial support from donors to assist with the extra costs of this concert, and also to support the administrative costs of the group in preparation for the performance at Bachfest 2020. 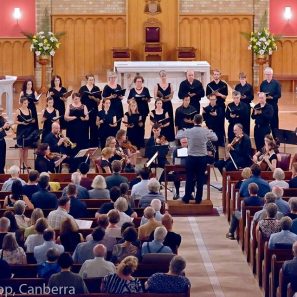