SMASHED is a highly ambitious short film showcasing some of Australia’s most exciting filmmaking and acting talent.

Renowned indie musician Ken Stringfellow (The Posies, REM, Big Star, Death Cab for Cutie, Mercury Rev) will compose the score for SMASHED, after collaborating with Snake Pit on Too Dark.

This tale of unbridled teenage passion unraveling in a recurring nightmare was awarded funding by South Australian government screen agencies the Media Resource Centre and the South Australian Film Corporation through the highly competitive Next Step initiative.

Next Step is designed to identify the project with the greatest likelihood of international film festival success.

SMASHED is definitely not your typical short film shot within four walls!

Although the filmmakers were awarded $15,000 cash and $7,500 in-kind support, SMASHED is a formidable challenge on numerous fronts.

The production demands of the film are extensive. Firstly, top class actors, state of the art cameras and lenses, generators and lighting were all utilised to capture the night-based action of SMASHED.

There have also been extensive logistical challenges. Numerous workzone traffic management plans have been required to close roads; council and state government film permits; the purchase of an action vehicle; engaging a precision driver for stunts and extensive travelling to Adelaide Hills and Fleurieu Peninsula locations have been required to realise the production.

Feeding the cast and crew of up to 40 people has also been necessary.

In post-production, Visual Effects shots need to be composed, an online edit for colour correction, sound editing and mixing and the score and music still need to be produced.

Once the final version of the film is delivered, various masters will need to be produced for the international film festival circuit.

SMASHED promises to provide film festival audiences in Australia and abroad with an indelible cinematic experience!

Your contribution will ensure that the behind-the-scenes crew who make the film are recognised for their expertise and time with appropriate honorariums. Furthermore, contributions will ensure the filmmakers have the resources to generate the largest possible audience for SMASHED and indeed give their careers the Next Step towards feature film production.

To find out more about what we do, read a review of our previous film Too Dark. 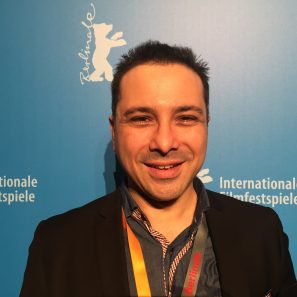 Manila-born Adelaide-raised filmmaker Michael Clarkin is an award-winning creative producer described by the Australian daily online trade publication Screen Hub as “a producer with a sharp eye for process and possibilities.”

Michael graduated with a Bachelor of Commerce from the University of Adelaide. A Churchill Fellow, in 2007 Michael worked at New York independent film production company This is That Corp (‘Eternal Sunshine of the Spotless Mind’, ‘21 Grams’) with legendary producer Ted Hope.

Michael’s previous collaboration with Sean Lahiff ‘Too Dark’ was a Grand Jury Prize nominee at the 2016 Seattle International Shorts Festival.

Michael believes believes that ‘The Boy Soldier’ will leave a profound impact on festival audiences around the globe and the project is already being tracked by numerous festival programmers of note.

A strikingly contemporary and dynamic story of a family seeking refuge from tyranny, in a semi-staged performance of Bach’s immortal "Christmas Oratorio".

The Bega Valley Youth Orchestra is a brand new orchestra founded in 2020. It has been a successful year. We now wish to grow and be able to offer instruments and scholarships to students in need.