Sisters Unearthly is a fantasy web series in a visually stunning, grotesque, and humorous world without man or machine. Deranged fairy tales tell of the bizarre and spectacular female creatures who live there. Their tiniest actions can spring forth new life – perhaps delivering sublime love or gruesome death.

This series is for those who seek out fantastical content by women and about women. Fantasy and genre film is a particularly male dominated cultural space, but there are countless female fans all over the earth.

We have nearly a decade’s experience creating film for this under-served audience. We have achieved this at film festivals and as part of feature anthologies, but now is the time to grow our own audience online.

The funds will be used to develop scripts for 5 x 5 minute episodes of the web series and produce 2 of the episodes. We are asking for $2500 from donors which will help us to complete these films by the end of 2018. We will use money raised through this platform to run workshops and writing days for the participating writers. The production funds will be used for gear hire, art department, and catering for volunteers.

This will give us the content required (scripts and visual proof of concept) to apply for further funds from the Screen Australia Online Media Fund. We will then complete production of the remaining three episodes.

Please help us dive deeper into the peculiar feminine, because no one else will make it quite so fun to watch. 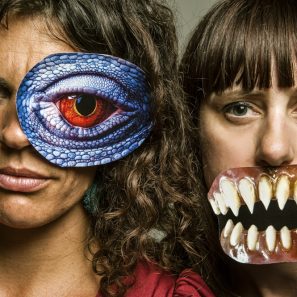 Vexatious Films is an exciting new venture from long-time collaborators Rebecca Thomson and Claire d’Este. We love high concept films and comedy, and what the female perspective can bring to genre film. Our previous films together have screened at international film festivals, won numerous awards, been broadcast, and distributed on iTunes and Amazon.

Rebecca Thomson
Rebecca is a writer, director, producer, and most recently has been loving shooting and editing too. Rebecca has directed ten short films and is a co-creator on the successful web series Women Of The Island. Rebecca also runs a highly exclusive film festival in her own backyard.

Claire d’Este
As well as being an award-winning screenwriter of 7 produced short films and one broadcast TV episode, Claire has a PhD in artificial intelligence and robotics. Her unique background brings something a little peculiar to everything she touches.