Jason’s nightmares are so vivid they interfere with his life. Rose becomes pregnant after a one-night stand. Jack is stalking the mother of his child.

These are the stories of Shadows, a short film spanning three generations of one family, where trauma is passed down from one generation to the next. It is a wild journey into each character’s unconscious belief that love is unattainable.

Jason escapes his father to find comfort with his lost mother in his dreams. Rose finds herself left alone with a child despite her attempt to find the father. Jack chases a man he believes is dating his girlfriend. The three stories exist in a dreamy state, a dream logic representative of the characters’ perceptions. What they project onto their world becomes their reality and informs their choices.

Over and over again in the last eight years I have witnessed people experiencing fears they don’t assimilate as their own. I do the same, all the time. Nevertheless we all have to live with them, through them or despise them. We make that choice.

Epigenetics tells us that this phenomenon is encoded in some part of our DNA. We inherit traumas and fears amongst all other things from our parents. But the beautiful thing epigenetics also reveals is that we have the power to change the encoded information through our own experiences. Our destiny is not written in our genes, we rewrite it ourselves constantly.

In the book It didn’t start with you, author Mark Wolynn tells the story of a man who, at nineteen years of age, and from one day to the next, developed insomnia.

In consultation with his therapist, the young man revealed that, thirty years earlier, an uncle he never met had frozen to death whilst working during a Canadian winter. His uncle died at the same age he was when he first experienced insomnia. The young man was experiencing the fear his uncle had the night of his death. If he would ever let go and fall asleep, he would die. Thus he had to stay awake for the rest of his life. Understanding that his insomnia came from his uncle allowed the young man to make peace with his own trauma, and this letting go cured his insomnia.

My interest in transgenerational transmission of trauma started a decade ago with the discovery of Alejandro Jodorowsky’s body of work, which inspired my previous short film Ataraxia. Now, with Shadows, I want to explore this journey further.

I am excited to work with a talented group of collaborators wanting to bring this film to life. Links to their respective body of work can be found below.
Melano Sokhadze – https://www.melanosokhadze.com/
Anton Rivette
Eryn Jean Norvill – http://lmcm.com.au/artists/eryn-jean-norvill/
Duncan Ragg – http://www.imdb.com/name/nm5464877/
Marcel Tabuteau

I was born in Australia in 1983 and then grew up in Lausanne, Switzerland. As the son of an actor and stage director, I evolved in the creative industries from an early age.

I have worked on more than 20 short films and plays, 7 feature films and attended workshops with Sławomir Idziak and Ali Cherkaoui (amongst others). In 2015, I did an attachment with Denis Villeneuve on the feature film Arrival in Montreal, Canada.

I have written and will direct SHADOWS as the final project of my Masters of Screen Arts at the Australian Film Television and Radio School (AFTRS).

Along with the producers, Melano Sokhadze and Anton Rivette, we want to ensure the fair pay for all those involved in the creation of SHADOWS. We have been inspired by the current campaign by the National Association for the Visual Arts (NAVA), who are calling for the fair pay of all artists in the visual arts industry (https://visualarts.net.au/advocacy/campaigns/artists-fees/). We feel that something similar needs to happen at the emerging level of the Australian film industry, and we hope that this campaign will help bring attention to this issue. 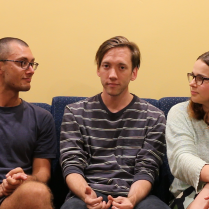 Follow the journey of SHADOWS on Facebook. Videos, photos and more will be posted along the way. https://www.facebook.com/SHADOWS.shortfilm.fairpay/