On a hot summer night during World War 1, Adela Pankhurst’s supporters gathered outside the bluestone walls of the women’s prison to “serenade” her with socialist songs, “cooees”, and coloured lights. The former suffragette had been gaoled for her energetic anti-war campaigning. Hundreds gathered; two were arrested.

We are creating a “Street Opera” to mark this centenary. A series of free performances in December will culminate in a re-enactment of Adela’s serenading on the centenary night, 7 January 2018, at Pentridge.

This colourful event calls for a re-enactment. It’s also significant in reminding us of the costs of war, and how WW1 and the 1917 conscription ballot deeply divided our community.

Serenading Adela will be written by Artistic Director Jeannie Marsh, an experienced composer and choir director, and veteran of many large community music events. It will be entertaining, big, colourful and educational.

The opera will incorporate Ghosts Don’t Lie, a moving song developed last year in community workshops by composer Stephen Taberner. The song, which tells stories of local families impacted by wars, has been enthusiastically received by singers and audiences (see video).

Our Street Opera will be performed free of charge to mass audiences. It will be inclusive, with no joining fees, sharing the benefits of participating in a musical event to all comers.

Our Street Opera is led by a small group of paid professional artists and theatre workers: Artistic Director Jeannie Marsh, choir coordinator Emily Hayes; actor and singer Lisa-Marie Parker as Adela, accordionist Dave Evans, a band leader and project manager. They are supported by experienced community volunteers, and our publicity and documentation teams.

Your contributions will help pay for this exciting work: in particular, the fees for our talented professionals, our major cost.

Our budget is $31,243. Creative Victoria have granted us $25,000, on condition that we raise at least $5,000 ourselves. Your $3000 will fulfill this requirement (together with a Moreland City Council grant, and donations already collected). Please help us reach this target. 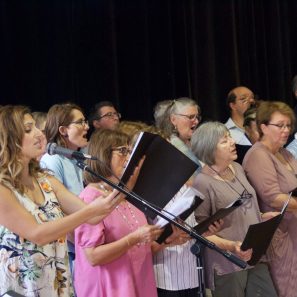 The Brunswick Coburg Anti-Conscription Commemoration Campaign is a community network. It was formed to mark the centenary of the successful campaign to vote against conscription for World War One.

We’ve reminded people of the lively debates of that time through a series of highly successful educational, artistic and cultural events.

Last year we reproduced anti-conscription posters from 1916, which were pasted up around Brunswick and Coburg. Playwright Neil Cole wrote a new play, “1916”, re-visiting the debates of that year through the eyes of activists Vida Goldstein and Adela Pankhurst. The performances involved professional actors and a choir from the local school.

We’ve compiled local resources for Brunswick Secondary College year 9 history classes and hosted experts to speak on this history. Local sites related to these events have been visited with walking tours. In May 2017, we held a one-day academic conference with 12 eminent historians and 130 participants.

We commissioned and performed a new song which will become part of our new project, “Serenading Adela: A Street Opera”.

These projects have been generously supported through donations, crowd-funding, and Moreland City Council grants.

Thanks to everyone who generously supported us with a donation. Together with some direct donations we still hope to reach our target! Keep 7 January free for our Opera, or join our rehearsals!

One day left! Thanks for the support.

Thanks to all our donors: with $2000 raised, Jeannie is writing the Opera and we are setting rehearsal dates. But we need more help to get that final $1000 needed to stage this event!