The Vegetable Plot is an award-winning band on a mission: to create a funky, fresh soundtrack to the food revolution that appeals to both parents and kids.

Since its release in 2015, our “Season One” album has found its way into cars, kitchens, classrooms, and Spotify playlists worldwide. Four of our lead singers have won ARIA Awards, and the show’s creator has become an internationally recognised health advocate.

But wherever we go on tour, there is one question we can’t escape:“When is Season Two coming out?”

The songs are written, the musicians and special guests are ready and waiting. We already have a number of studio dates booked in May and June.

With YOUR support, we want to add more dates in July and August, with a view to having the completed album available both digitally and on CD in time for Christmas.

Please help us bring these new songs to life!

The Vegetable Plot was created to help parents win the fight against unhealthy food.

Our songs turn vegetables like Aspara Gus and Rocket Lettuce into colourful characters, with their own unique personalities and storylines. We have twice collaborated with NSW Health and The Healthy Kids Association to spread positive messages about healthy eating to tens of thousands of school children. Our music is being played in classrooms around the world.

But we’re not just a band with a message: our music IS our message!

Our shows feature real musicians playing and singing live, not aerobics instructors in rubber suits dancing to a backing track. Our lyrics are filled with jokes and puns to show kids that language isn’t just something you learn to pass a test, it’s an elastic substance to be played with and enjoyed.

We want you to JOIN US in our plot to create a soundtrack to the food revolution, and help us to put another album of fresh, funky vegetable songs out into the world.

Your donation will go towards the production costs of our album – studio hire, producer fees, session fees, and mastering.

The end result will be a world-class studio album that will be beloved by kids and parents around the globe. It will be a complex, warm, delightful listening experience filled with musical variety, beautiful singing, humour, fun, and creativity. You will feel proud to have been a part of it.

You can find out more about The Vegetable Plot at www.thevegetableplot.com.au and keep up to date with the recording of the album via our Instagram and Facebook pages. 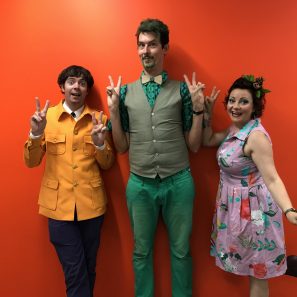 The Vegetable Plot is an award-winning musical act for kids and families that has sprung from the soil of the Australian roots music scene. They are considered to be one of the best children’s music acts currently working in Australia.

Created by songwriter/comedian Luke Escombe in 2014, The Vegetable Plot began as a live show at the Sydney Fringe, where it won the award for Best Children’s Show. The subsequent album “Season One”, recorded at Vienna People Studios in Sydney, featured all of the musical guests from the live show, including ARIA Award-winning Blues and Roots act “All our Exes Live in Texas”.

Since the release of Season One in 2015, The Vegetable Plot has become a nationally-touring band, playing at schools and libraries across the country, as well as major events like Sydney Festival and Splendour in the Grass. They have twice partnered with NSW Health to provide the soundtrack to Fruit and Veg Month and received coverage on every major media network. In 2018 the band signed a licensing deal with Macmillan publishing to distribute their CD internationally, in partnership with Hoopla Education.

Where rhythm meets melody and storytelling

We had percussionist Jess Ciampa in the studio with us this week, with all his bells and whistles, shakers, congas, timbales, xylophone etc. A sheer delight!

Our new partners in grime

We’re delighted to announce that we have officially partnered with the Australian City Farms and Community Gardens Network to help spread our plot across Australia.

Here come the bass and drums!

Mr Beet and Sir Paul McCarrotney came into the studio last week to add the groove to six of the 24 songs currently in contention for the album. Man, these guys really know how to set toes a-tapping

What a great response!

Wow, what an amazing response to our last newsletter! I’m so humbled by this wonderful show of love and support. Thanks for all the messages you’ve been sending too, I’m loving all the puns!

A little video of our first day in the studio: https://youtu.be/hwC8l1ui_ZM

Our first two days in the studio!

Hello wonderful supporters, we’ve just finished our first two days in the studio, planting the seeds of the 22 tracks in contention for the album. So good to be recording again! Thank you all