The closest relative to Saudade is the family-portrait home-video. That portrait is at the very heart of this story, in which a group of family members gather inside a suburban Australian home to celebrate the last Christmas of the millennium.

The home-video offers alluring hints of everyday life. For Christmas, the home-video brings to mind warmth, matched by a sense of ritual, family tension and nostalgia.

There’s something illuminating about the intimacy of a home-video, and Saudade hopes to celebrate the home-video as a historical and cultural artefact. Set firmly in 1999 – an era when the camcorder was rolling at every family event – Saudade will show a family engaging in their yearly Christmas rounds – unwrapping presents, singing Christmas carols, and eating a Christmas lunch. Casual and ambient details of a late 90s Australian suburban home will be emblematic to the story.

Saudade will rely on the essence of improvised performance and will take its cues from the method of revered filmmaker Mike Leigh. Mentored by award-winning filmmaker and expert in character based improvisation (CBI) Robert Marchand, Lucien hopes to recreate the immediacy and spontaneity of theatre-based performance through his use of CBI.

What’s most significant about Saudade, is its portraiture: we are wanting to recreate and preserve an ordinary scene from the past.

Lucien Perry is a 23-year-old filmmaker currently undertaking his final year of film at the Victorian College of the Arts (VCA) in Melbourne. Lucien’s previous directorial work include a music video for Melbourne artist Oscar Perry’s Nespresso and short films TUB (2017) and Unforgettable (2019). TUB was awarded Best Edited Film at Swinburne University of Technology (2017) and was nominated for Best Tertiary Film at Setting Sun Film Festival (2018).

Ali has worked as a Festival Programmer for the Brisbane International Film Festival.

He is currently in his final year of Masters of Producing at VCA. He completed his under-graduate degree in Film Theory and Creative Writing.

Will and Mami Back

Max is the best 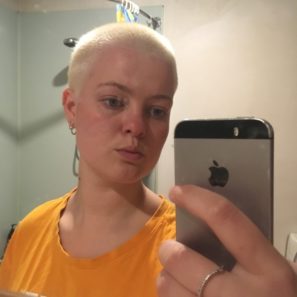 The most enduring idea of our project lies within the title. It describes a feeling of longing for a person or place that can never be revisited. It is the love for something that will never return.