The Sarajevo Haggadah Project is delivered in conjunction with Multicultural Arts Victoria and supported by Gandel Philanthropy. We express thanks to the philantrophists and donors who have previously contributed in an earlier campaign and helped towards the airfares of Dr Tauber. We return for the second campaign with the view of employing the excellent team of publicists Margot Gorski and Diana Wolfe, who are extremely sensitive to this unique and timely project, as well as to help with some of Dr Tauber’s accommodation and organization of some extra presentations and opportunities to meet him.

This is a project about Jewish and broader Balkan history, culture, reconciliation and tolerance. It is suitable for anyone with interests in history, Jewish cultural studies, activism and music. It starts with Jewish history but very quickly goes well beyond it, asking its audience to look within and explore what constitutes the pillars of humanity, tolerance and coexistence.

To bring it closer to Australian audiences, a parallel can be drawn between the Australian philosopher Raimond Gaita and Dr Eli Tauber. At the turn of the century, in his works “COMMON HUMANITY” and “ROMULUS, MY FATHER” Gaita posed a new perspective on the idea of common humanity. Only a decade later, drawing on his own family (hi)story and the turbulent events in ex-Yugoslavia, Tauber did something similar. His work “WHEN NEIGHBORS WERE REAL HUMAN BEINGS” and research about “THE SARAJEVO HAGGADAH” remind us of the power of humanity. Rather than focusing on tragedy, Tauber sheds light on those who do not remain complacent at times of suffering. He shares stories of common people and unsung heroes who help their “human neighbors.”

At a time of a global climate crisis in Australia and beyond, there has never been a more urgent and important time to recall and support projects, lessons and actions of common humanity and celebrate those that will not remain silent.

As stated earlier, these donations will be used for the particular, carefully-selected publicity team Diana Wolfe and Margot Gorski, whose work specializes in activism, humanitarian issues, arts and, particularly music. They will work on a targeted publicity campaign to give this project local and national exposure, and introduce Dr Tauber to the Australian audiences.

The final outcome will be a series of public performances (public lectures by Dr Tauber featuring live music by the ensemble SARAY Iluminado) at the Jewish Museum of Australia, the Abbotsford Convent and the Embassy of Bosnia and Herzegovina in Melbourne and Canberra. 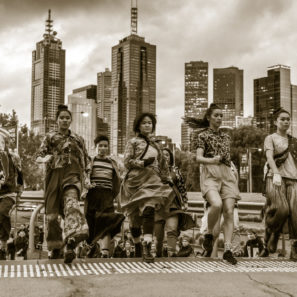 Multicultural Arts Victoria (MAV) has evolved over four decades into one of Australia’s most important bodies for the discovery, development and promotion of culturally and linguistically diverse (CALD) contemporary art, heritage and cultural expression.

Over 1 million participants are engaged in our program which includes long-term initiatives for career development and creative capacity building for over 2,000 artists and 500 communities from diverse and emerging backgrounds.