This film will be submitted to several Australian-based & international film competitions and festivals in order to give the cast & crew recognition for their contribution and talent. As it is an Indie film, there is no plan for an immediate commercial release.

The entire cast & crew are volunteering their time and working free of charge in hopes that the film will add credit to their portfolio. The majority of the movie is being filmed in Renmark where the generous council & community have been assisting in production as much as they can. This has allowed us to celebrate the breathtaking scenery of the river land in the film and show off some of the unseen wonders that the river land has to offer. Whilst there is no specific target audience for this film; we are in hopes that a younger generation of Australian actors & film makers get a chance to view it, to show that there is no limit to film making when it comes to Australian cinema. We are aiming to have the film completed by early 2020.

Roadkill is an example of a small group of talented people coming together to create something artistic & beautiful. It is important to show today’s youth that cinema is still a thriving industry and no matter who you are or where you come from there is always opportunity to pour your heart & soul into a project you are passionate about to try and make it a reality. This film is also a chance to advertise some of the beautiful locations South Australia has to offer, & given enough attention, hopefully attract tourism & business to some of the more rural Aussie locations.

The production stage of this film is by far the most stressful when it comes to atmosphere and funds. Whilst we have overcome all the challenges of filming so far, this has put a strain on funding and resources. We would use any donations to help improve the circumstances of filming, increase the overall quality of the project and create a stronger marketing strategy for the film to gain awareness and notoriety. We are asking for donations of any size to help keep the project running smoothly & on schedule.

Donations will be used to primarily fund equipment hire, accommodation & travel for cast & crew, for damage repair and for marketing of the film. It is important when creating a film of this size that it gets as much attention as it can so that the cast & crew’s efforts do not go unnoticed. The end result will be a polished feature length thriller film that follows Connor Shelby, a young thief who operates along the roads & highways of the Australian outback until one day he steals from the wrong man and gets caught in the crossfires of Detectives Albert & Ernest; two specialist investigators who are following the trail of a serial killer loose in the outback. Connor must adapt to survive as he faces the consequences of his actions whilst the detectives must tread carefully as they blur the line of morality & corruption. 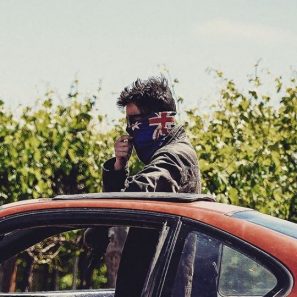 A young filmmaker who is currently undertaking his first feature length independent film.

After directing and/or acting in several short films and theatre productions in South Australia – Alex Whitrow has written a script for a thriller film that takes place in the heart of the river land and follows the characters as they journey through and explore the creeks, vineyards, towns & highways of the rural towns and breathtaking landscapes.

Alex Whitrow attended Pembroke School where he studied film and drama. He has acted in several Adelaide fringe performances as well as Flinders University short films and acted in his own shorts. Most notably, he directed “Caffeine” which won the Best Australian Student Film award at the Youth Adelaide International Film Festival in 2017 – and “Hunt in Red”, where Whitrow wrote, acted and directed, winning the Best Director & Best Film awards at the 2019 Unreel Film Festival Awards.