In 2018 the Adelaide Symphony Orchestra commissioned UK based composer Paul Rissmann to set to music the beautifully poignant children’s book “What Do You Do With An Idea” written by US author Kobi Yamada. What resulted was a modern masterpiece of children’s programmatic music which has, since the Adelaide premiere, been performed by the London Symphony Orchestra at The Barbican.

The Australian Session Orchestra are privileged to create, in Brisbane, the official recording of this inspiring work under the baton of Gordon Hamilton and featuring a choir combining voices from The Australian Voices, and The Voices of Birralee.

Despite seemingly being written for a young audience, “What Do You Do With An Idea” speaks to everyone who has ever dared to chase a dream. It presents the journey of a child who has a world changing idea. But rather than simply working hard and attaining success, the story presents the reality from a personal and social context, of what it means to break from the status quo. The message is a vitally important one, both for children to learn and for grown-ups to be reminded of.

This project brings to Australia an international line up of world renowned artists, and features some of the best musicians Australia has to offer with The Australian Session Orchestra, The Australian Voices, and Voices of Birralee conducted by Gordon Hamilton.

The recording will be a foundational element in a creative educational program that will be promoted to professional orchestras and schools around the world.

Recording “What Do You Do With An Idea” is a major project which will immediately go to an international market. Listed below are specific elements which your donations will fund.

$70,000 will cover expenses and will allow us to create this recording in Australia. 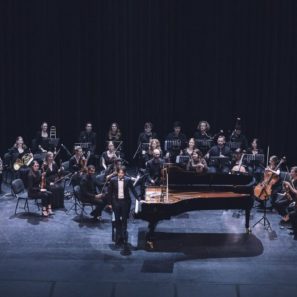 The Australian Session Orchestra was created in response to demand for a full scale symphony orchestra in Australia with the capacity to support touring artists by assembling ensembles around the country, comprised of Australia’s best orchestral and session musicians.

From the Fringes will be a weekend of workshops that will look at professional and artistic development to help equip Top End artists with the skills to engage with more opportunities.