The manuscript for my forthcoming book, Kristian Fredrikson. Designer, to be published by Melbourne Books, has been described as ‘an impressive work with beautiful illustrations.’ The publisher’s aim is to produce it as a ‘large format hard cover’ book. This will properly highlight Fredrikson’s rich and diverse output, an output that stretches across five decades of work for dance, opera, theatre, film and musicals.

Publishing the Fredrikson book in such a manner is an expensive procedure, and the aim of this ACF project is to raise $15,000, which will be added to the publisher’s own significant financial outlay. This will help offset the cost of printing, especially the amount of colour printing that will be involved, given that around 90% of the illustrative material is in colour. High quality colour printing will give proper prominence to the remarkable art that Fredrikson produced, which drew so strongly on his wide knowledge of art history and his pursuit of excellence through intensive research.

In so many cases, his designs – his costume designs in particular – are beyond what we think of as a design for the theatre. They are not ‘stick figure’ designs but fully realised portrait-style images that display the nature of the characters represented in the works. So many artists across theatrical genres who have worn his costumes remark on this aspect of his designs.

The quote at the beginning of this project is from a review article in an undated newspaper clipping from an unidentified newspaper found in Fredrikson’s personal archive. The article refers to the 1975 Melbourne Theatre Company production of The Revenger’s Tragedy, which was a milestone in Fredrikson’s career. It was while working on that production that Fredrikson met choreographer Graeme Murphy. This meeting changed the course of Fredrikson’s career. This is one of the many themes discussed in the book

Please consider donating to this project so that the final product will be worthy of Fredrikson’s remarkable career and his extensive input into Australasian performance. 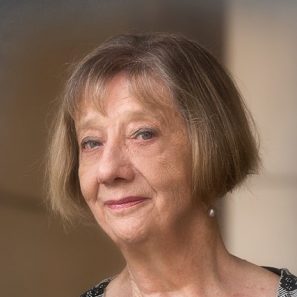 Michelle Potter is an arts writer, historian and curator. She is the recipient of two Australian Dance Awards, Services to dance in 2003 and Outstanding achievement in dance on film in 2001. She was inaugural Curator of Dance at the National Library of Australia, 2002–2006, and Curator, Jerome Robbins Dance Division, 2006–2008. Since returning to Australia she has worked in a freelance capacity.

She began writing about the arts in 1990 and her work has been published in magazines, newspapers, theatre programs and scholarly journals across Australia and around the world including in the UK, USA, Germany and New Caledonia. She is the creator of three documentary films and five books, most recently Dame Maggie Scott: a life in dance (Text: Melbourne, 2014). Her oral history recordings number 150 and have largely been for cultural institutions in Canberra. All have been with people working across the arts (dance, theatre, opera, visual arts, circus).

In 1994 she founded Brolga: an Australian journal about dance and continued to edit that journal until mid-2006. She established her website, Michelle Potter … on dancing, in 2009 and continues to publish reviews, articles and news items on that site.

The SpringBoard is a campaign for funds to develop a new review website, contribute to writers' fees & provide operational support for The ReviewBoard’s publishing platform supporting Australian art & critical writing.

The Deborah Cass Prize for Writing is for emerging writers of any age from a migrant background to tell stories that illuminate the diversity of the migrant experience.