Computers learn and develop into AI improvising partners, computer game-like control creates funky rhythms out of everyday sounds, a wild improvisation takes flight with the aid of a 3D sensor attached to my hand, stop motion animation creates a quirky tableau, film and music combine in intricate and unexpected ways and a piece is composed by the internet.

With performances planned in Sydney, Melbourne, Perth, Adelaide and Brisbane, as well as performances at major festivals and venues in the UK, Germany and Norway, Piano Ex Machina will showcase innovative Australian music on the international stage.

Jon Rose – Ballast, a virtuosic whirlwind of sound with a 3D hand sensor.

Ben Carey – Taking the Auspices, using AI and 3D scans of objects to create a sophisticated live sound and video interaction with the piano, inspired by the flocking of starlings

Stretch Goals: If the target is exceeded, the funds will go towards two big international commissions: by Michael Finnissy (UK) about queer pianists and by Nicole Lizée (Canada) about the films of Martin Scorsese.

Help Make It Happen
I am raising $10,000 in donations to cover the costs of the project, including:
• Commission fees for the 5 Australian composers
• Performance and touring costs for me and electronics performer, Ben Carey
• Marketing
• Equipment including motion-sensors, microphones and software

How your donation goes twice as far
One other thing: because I’ve been selected to be part of Creative Partnerships Australia’s MATCH Lab program, every dollar donated will be matched by the federal government. It’s a rare opportunity to double the donations, so your dollar goes twice as far!

Your donation will also be tax-deductible

Although I’ve raised some funds, I need your help to make it a reality.

Donor benefits
– All donors will become part of my donors’ circle, receiving exclusive newsletters and updates. 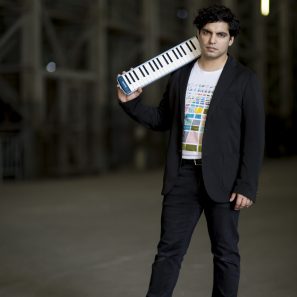 Zubin Kanga is a pianist, composer, improviser and technologist. He has collaborated with many of the world’s leading composers including Thomas Adès, Michael Finnissy, George Benjamin and Steve Reich, and premiered more than 90 new works. He is a member of Ensemble Offspring and the Marsyas Trio, and has performed piano duos with Rolf Hind and Thomas Adès. His solo work in recent years has focused on new models of interaction between a live musician and new technologies, using film, AI, motion capture and virtual reality.

Zubin has performed at many international festivals including the BBC Proms, Huddersfield Contemporary Music Festival (UK) Melbourne Festival (Australia), Manifeste Festival (France) and Borealis Festival (Norway). He has performed several concerti under the composer’s baton, including with Thomas Adès and the Melbourne Symphony Orchestra and with Beat Furrer and the London Sinfonietta.

A Masters and PhD graduate of the Royal Academy of Music, London, Zubin recently finished a post as post-doctoral researcher at the University of Nice and IRCAM, Paris and is currently the Leverhulme Research Fellow at Royal Holloway, University of London.