Phoenix Collective aims to excite and inspire people of all ages and walks of life through diverse ensembles, innovative programming and vivid performances. The recital series supports numerous musicians, a University of Canberra intern and auxiliary staff in Canberra, Sydney and the Central Coast.

This particular project is to convert our upcoming concert programs into digital, high-quality audio and visual presentations. The effects of COVID-19 were immediate and existential in nature. Within a week, all performance venues had closed for the foreseeable future and have left the remainder of the 2020 season uncertain. Phoenix Collective can continue to deliver music to its subscribers, followers and future audience online, given appropriate funding and resources. In addition, these resources can then continue to be used to maintain an online digital platform, to present our live performances into the future, to a wider audience.

This project is particularly important during this time of uncertainty and financial hardship for Australian artists. Offering meaningful artistic work for the artists involved and for the audiences to experience. It also creates future expansion of an online digital platform for PC’s performances, the potential for sharing our artistic vision further afield.

PC would use this funding towards:
– Acquiring appropriate computer and recording equipment to produce online concerts and other audio/visual material
– Musicians
– Marketing, Admin and Production
– Audio and Video Engineers
– Replacement income during COVID-19 period
– Providing some income to cover living expenses for PC musicians while creating and producing content
– Honouring the commitment of a full 2020 program to PC’s subscribers and audience
– Potentially expanding to interstate audiences and other previously inaccessible markets.

Thank you for considering a donation, as it would create much-needed relief mentally and financially, allowing us to continue creating fresh and inspiring music. 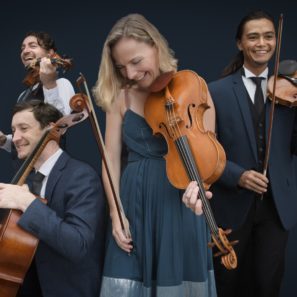 Phoenix Collective showcases classical music with a uniquely Australian edge. Bringing together some of Australia’s most accomplished and high-profile musicians in a riveting recital series, Phoenix Collective concerts offer a range of exciting ensembles and genres set in intimate & iconic venues.

PC began in 2018 as an initiative of violinist, Dan Russell. A means to play high art music with exceptional musicians that share similar views musically, artistically and emotionally. In just over 2 years we are playing concerts in 3 cities, at 5 different core venues and several additional projects, recordings, music society performances and workshops. With 2 new live concert series soon to be announced and an ever-increasing recording and external project workload, Phoenix is rising.