Based on a true story, Phantasmagoria is a play that explores the complex relationship between a woman and her violent father long after he has passed away.

Bryony unearths her father’s childhood experiences in Sri Lanka, his brutal World War 2 history in Burma, migration, alcoholism, and his family’s eventual escape from him. Using a lens of magic realism, the work plunges beneath a seemingly everyday domestic space to reveal family secrets, hauntings and complex emotional landscapes.

Travelling back and forth through time and space, Phantasmagoria is a sensorial feast flavoured with grief, love, loss, absurdity, surprise and a generous dose of magic. Dynamic and sensitive performance, comedy, puppetry and evocative animated imagery give physical life to the liminal realm of ghosts and the unseen. Phantasmagoria has its world premiere season at Theatreworks from May 6th to May 16th

Creating powerful theatre from lived experience that responds to the crisis of family violence is a crucial and culturally urgent driving force for this work. Phantasmagoria challenges the myth of the monster perpetrator and digs into the dark tangled matter of gendered violence.

This extraordinary multi-artform work blends puppetry, animation and projection with experimental live performance. Phantasmagoria is for those who question the dominant narratives of our society, anyone who has loved and lost someone, for anyone who has survived wars of the body and the heart. We want to ignite change through diving deep into stories that affect us all and to shine a light into dark places.

Phantasmagoria has already been through an extensive creative development process, our exceptionally talented team of theatre artists are working hard to bring this show to life in order to stimulate essential conversations about the family violence epidemic.

We are asking for your support to do this through donations that will help us cover production costs that include artists fees, sound design, lighting, sound, prop and set design, animation, Auslan interpretation, audio description, publicity and marketing. We have an extremely limited budget due to the current arts funding climate. Our team are currently donating their time, energy and resources based on their belief in the play’s ability to have a deep social impact. We are planning Q&A sessions after the show to amplify its effect.

Our team is committed to creating powerful, unique, accessible theatre for social change. Your donation will help us create the best theatre we can possibly make so we truly honour this multi-dimensional story and the many others that remain untold. 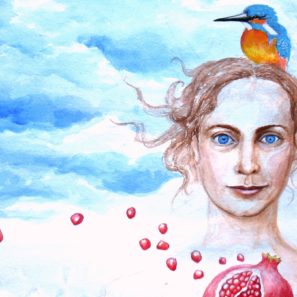 As a first generation Australian with Sri Lankan/Austrian cultural heritage, her work is concerned with place, multi-voiced narratives and complex histories. In 2018 she completed a Master of Writing for Performance at the VCA. She has performed internationally and nationally with the Snuff Puppets, Black Hole Theatre, Big Mama Productions, Lyric Opera, Museum Victoria and has worked extensively as a performer and theatre maker with Melbourne independent theatre companies over 15 years.

Her film and animation work has received awards from The Heart of Gold International Film Festival, been broadcast on ABC Asia, NITV and SBS, screened at the Art Galleries of WA and SA, and commissioned by Screenwest. She works collaboratively in theatre, film and visual arts with culturally and linguistically diverse artists through organisations such as Arts Access Victoria, Arts Project Australia, Warmun Arts Centre, Waringarri Aboriginal Arts and Mangkaja Arts.

Sadly we have have decided to postpone our show season in response to Covid19. We are continuing with our crowdfund for the show which will go ahead at a later date. More updates soon and take care xx

Thanks so much for your generous support wonderful humans! So far we have been busy in the studio creating props, puppets and animations, next week we begin rehearsals, we are really excited!

Never Let Me Go is a new play about the onset of AIDS in Sydney and the radical approach by the gay community and politicians that saved more than 25,000 lives- all set to an 80’s pop soundtrack arranged for a choir.