The Peace Foundation has been supporting Australian artists working to raise awareness about human rights, Indigenous issues, social justice and environmental sustainability for more than 25 years.

The impact of this work has been significant, raising the profile of local artists and generating the discussion that can lead to real social change. Significant projects include the Kaurna Reconciliation Sculptures and the Kaurna Walking trail. The Kaurna miyurna, Kaurna yarta tampinthi sculptures are dedicated to the Kaurna People. Commissioned and funded by the Peace Foundation in a valued partnership with Adelaide Festival Centre Trust this public artwork is associated with the Kaurna Walking Trail which provides an opportunity to discover places sacred to the Kaurna people around Karrawirra pari (River Torrens) and the Adelaide City area. The artwork is a gift to the Kaurna people in recognition of their traditional ownership and custodianship of the Adelaide Plains and it is an act of reconciliation.

The Tree of Life Gift of Peace to the people of Nagasaki is the first Australian work displayed in internationally renowned Nagasaki Peace Park.

In the words of Keith Peters, Chair of Maralinga Tjarutja Council,

“The wind can blow an idea away,

But a sculpture holds an idea forever.”

Australia’s sculpture gift originates from the remote Aboriginal community of Yalata, in South Australia, the site of the Maralinga atomic tests.

The gift from the Mayor’s for Peace (Australia) is a gift from one atomic survivor community to another.

It was inspired as a contribution to the peace activities to commemorate the 70th year anniversary of the atomic bombings in Japan.

The Graham F Smith Peace Foundation’s 2015 Annual Grant was awarded to Nuclear Futures for their three-year program of arts exposing the legacy of the atomic age through the creative arts and has impacted world tolerance and understanding between Australia and our neighbouring countries.

On the Banks of the Tigris is a beautifully crafted, emotionally engaging, and culturally important film and a long term funding project of the Graham F Smith Peace Foundation to unite people across cultural, religious and political boundaries. The film historically traces the routes of Iraqi folk music in a multi-cultural and tolerant society where Jews, Muslims and Christians lived peacefully together for thousands of years. Our project is building significant bridges between communities and to increase understanding of Iraq and the Middle East.

The Graham F Smith Peace Foundation funded 2 secondary school projects to promote peace, understanding and acceptance. Students through the educational curriculum were engaged in Artists Make a Difference and Building Bridges for Future Peace. Four secondary schools were matched with three artists and their students and teachers to produce 4 banner works of art promoting peace that were exhibited at Adelaide Festival Centre. The works are now on permanent display at their respective schools. 500 students and their teachers and artists were involved in making banners, creating a dance, filming and performing on the Adelaide Footbridge as part of the opening ceremony of the Come Out Children’s Festival 2015.

We receive no government funding, so it has been left to volunteers to raise the money to provide grants of up to $10,000 and an annual Adelaide Fringe Peace Award.

We would now like to secure the Foundation’s future, expand its reach and build on its strengths and potential. The more money we raise, the more funds can be directed to artists’ projects that will make a difference in the future.

In the current environment, there is only so much that volunteers – no matter how dedicated – can achieve.

We get great support from those who know us. We now need to spread the message more widely so even more people understand what we believe in, what we are working towards, what we have achieved to date, and how their support can make a difference.

The Peace Foundation is a small volunteer- run, philanthropic organisation which provides annual grants ($10,000, $1,500, Adelaide Fringe Peace Award) and sponsorships to the art community to work in the areas of human rights, social justice and environmental sustainability.

Fiona and Maarten Ryan and Ryder 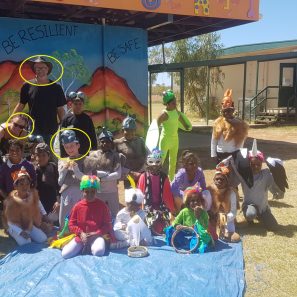