Olivia Sanders Robinson is a Perth based singer who seeks to explore opera in all its forms. From her studies in research at WAAPA, which focused on new ways of interpreting historical documents to her recent experimentation with shadow art and opera, Olivia has an innovative approach to operatic performance. Her place and scholarship at the prestigious Royal Northern College of Music, will give Olivia the opportunity to develop her craft to the highest level and realise her vision. Join Olivia on her journey to Manchester and beyond.

I am incredibly excited to have been offered a place at the Royal Northern College of Music (RNCM). This is a timely opportunity that will allow me to develop my craft through exposure to the highest quality tuition. This course offers one-one-one vocal lessons, specialist coachings, masterclasses with leading performers and the opportunity to work on large scale operatic works with expert conductors and directors.

Studying in the UK has been a dream of mine since I began my Bachelor of Music at The Elder Conservatorium of Music and a necessary step for many young Australian opera singers. Alongside the traditional performance opportunities that this study will create, my artistic development at RNCM will support me in developing my work combining opera with shadow art. This is an avenue which will be enhanced by my study at RNCM. I look forward to the ways in which this study will allow me to give back to the musical community in Australia through performance, engagement with education and contact with the next generation of singers.

Donations will contribute to the cost of tuition at RNCM, flights from Perth to Manchester and accommodation at the RNCM Hall of Residence.

Although I have received a partial scholarship, I still require approximately $20,000 to cover these expenses. I plan to contribute to this through fundraising concerts both in Adelaide and Perth as well as with my personal savings.

I appreciate that in this unprecedented time there may be concerns regarding my ability to travel internationally in September 2021. Although I am hopeful that this will not be an issue, through COVID-19 RNCM has successfully moved their tuition online. If international travel is not available I will start the semester online, and move to the UK as soon as practicable.

At the end of this Masters I hope that I will have bridged the gap between study and professional work, fully preparing me to launch a career in music. I am so excited to take this journey and thank you for your support. 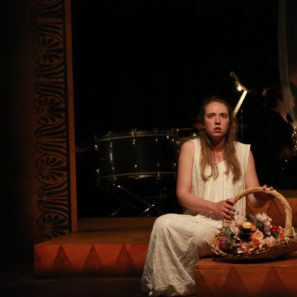 Perth Based Mezzo Soprano Olivia Sanders Robinson is most at home on the stage, described by Adelaide Now as a “splendid Cherubino” with a “sparkling personality”, and The Western Australian as “hilarious” in her portrayal of Mrs Herring in WAAPA’s 2016 production of Albert Herring.

Her most recent roles include Lucretia in ICW’s Production of Britten’s The Rape of Lucretia and both Zita and La Principessa in The Cuskelly College of Music’s production of Puccini’s Il trittico.

Olivia has a keen interest in historical performance, having recently completed her Master of Arts (Performing Arts) on the historical performance of Schubert’s Lieder. As part of her thesis Olivia recorded Schubert lieder, influenced by the style of Johann Michael Vogl which was coached and accompanied by Stewart Smith.

Olivia is an avid choral singer who performs weekly as one of five choral scholars at the Church of the Resurrection, Swanbourne. She is often involved in concert and oratorio performances, having performed with a number of organisations including The Burnside Symphony Orchestra, Harmonia Australis, ICW Productions, Art Song Perth and Musica Amica.