Based in Brisbane and the Gold Coast, the Orava Quartet – brothers Daniel and Karol Kowalik, Thomas Chawner and David Dalseno – were the first ensemble to be signed to Deutsche Grammophon Australia, chosen for the label’s historic first release in 2018. Formed in 2007, based in the USA for two years and invited to perform in major venues and festivals around the world, the Orava Quartet is known for its “breathtaking intensity” and its distinctive sound, wrought from a rare, “unified concept of sound and musical expression” (Limelight Magazine).

With the devastating worldwide spread of the coronavirus however, the Quartet’s concert engagements for the coming months of 2020 have all been postponed or cancelled in line with government directives around public gatherings, along with the planned recording of the Quartet’s long-awaited second album, and an overseas tour.

While some ensembles are attached ‘in residence’ to a University, which brings a measure of income stability, the Orava Quartet is not currently hosted by any tertiary institution, which means that their livelihood is wholly dependent on concerts and limited private tuition – both of which have stopped during these turbulent times.

The Quartet also does not receive any ongoing public funding, and has relied on a mix of both concert fees and the generous support of donors (including through the ACF) to achieve many of its recent goals, such as touring to Canada in 2019, and touring interstate to perform in regional centres where the significant travel costs of a Quartet present a real obstacle to smaller venues and concert series.

So we are asking for your kind support – if your own financial position allows it, in these uncertain times of Covid-19 – of any level, even just the cost of a concert ticket that you may otherwise have paid to attend a concert by the Oravas (or any other artist).

Your tax-deductible donation will go in the first instance directly to the Quartet as income for their livelihood, in the absence of performance fees and any private teaching.

Beyond this, we hope that your 2020 Support will allow the Oravas to emerge on the other side of this global crisis with new ways to connect with audiences via streaming or other online initiatives, and an even more exquisite second album for you, their supporters, when it’s safe once again to record it (with plans to release in 2021).

In these troubling times, the isolation imposed by the virus brings with it the chance to think deeply, prepare, create and make new connections with each other, as well as the time to dive into the solace offered by music of all kinds. Please don’t hesitate to get in touch, we would love to hear from you. 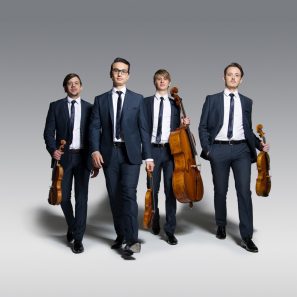 The Orava Quartet has been hailed by Limelight magazine as “the most exciting young quartet on the block” and predicted by The Australian to become “one of Australia’s proudest cultural exports.” Earning a reputation and devoted following for their genuinely thrilling performances, the Quartet – brothers Daniel and Karol Kowalik (violin and cello), violinist David Dalseno and violist Thomas Chawner – bring their unique sound and breathtaking intensity to the classics of the string quartet canon.

Selected by Deutsche Grammophon for its historic, first Australian recording release in 2018, received with widespread critical acclaim, Orava Quartet has performed throughout North America, the UAE, and Asia, working closely with the world-renowned Takács Quartet in the USA and winning top prizes at the 2013 Asia Pacific Chamber Music Competition.