Over the past 25 years I have created a number of bronze sculptures of important and influential Australians around Australia. Nick Columb is arguably one of the most successful and influential race horse wwners in Australasia since W.W. 2 .

From a very small number of horses to race each year, his successes were most spectacular.  As an influential racing administrator, he was Chairman of the Victorian Division of Thoroughbred Racehorse Owners Association. From there, he took on the same post nationally and then the Asian Division. In recent years, he has held a very significant role with The Hong Kong Jockey Club.

Family, friends, clients, owners, breeders, officials and the media are all interested in recognising his contribution in the world of Racing and to Australia.

The sculpture will take approximately 9 months to create.

The project is important because it is the community that decides who should be honoured. Someone who is respected by the community and gives back to the community deserves to have a sculpture made of them. I am asking for donations to the total of $128,000 to allow me to make the best possible work of the highest quality and to enable me to cast it in bronze in Australia.

Donations will be used to fund the design and creation of a bronze statue of Nick Columb from the initial sketch right until the bronze casting and patination. The end result will be a statue that in the long term will permanently remain in N.S.W.  However, preliminary discussions have been held with the Melbourne Racing Club at Caulfield as to whether the Statue may come down there to coincide with the 50th running of the M.R.C. Group 1 Blue Diamond Stakes which will be held in February next year. 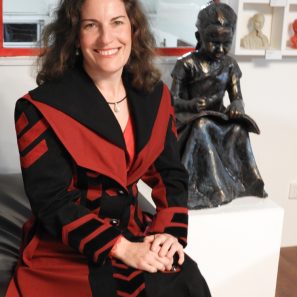 Having sculpted the likes of Dr Victor Chang, Pope John Paul II, Dicks Smith, AO and Patrick Corrigan, AM. Linda Klarfeld is one of the best known figurative sculptors in Australia.

The first female sculptor in Australian History to be commissioned to create portrait busts for the Prime Minister’s Avenue in Ballarat. Her portrait bust of The Hon. Tony Abbott was unveiled in June 2017 and attracted national attention.

She has held 14 solo exhibitions and her sculptures stand in front of cathedrals, in prestigious private schools, in art galleries and homes of collectors around the world.

PHOTO 2020 is a major new international festival of photography for Melbourne and Regional Victoria being delivered in collaboration with cultural institutions, museums, galleries and universities.