Alice Chance and Brooke Green will each write for Laura Vaughan, (bass viol) for performances with Josie and the Emeralds (soprano and viol consort) in October and November 2018. Once these works have been finished, the composers plan to ship them around the world, taking advantage of the growing interest period instrumentalists are showing towards new music in their practice.

Laura Vaughan is one of Australia’s most virtuosic bass viol players and a wonderful advocate for this versatile, beautiful but lesser-known instrument. The bass viol was probably at the height of its popularity in the mid-18th century and since its modern revival there are a small, but growing number of composers fascinated with its possibilities. For the last few years, Josie and the Emeralds have been combining new and old music in their programs. In April/May 2018 we presented 5 concerts of 15th century music along with several world premieres in response to The Lady and the Unicorn tapestries at the Art Gallery on NSW. As composers and performers, Alice and Brooke are inspired to continue creating new music for old instruments, particularly the viola da gamba.

By donating, you will encourage and foster the development of new music for period instruments in Australia. You’ll enable two new glistening works to come to life featuring the viola da gamba and you’ll likely hear of repeat performances locally and internationally. To find out more about the artists you’re supporting, follow these thinks. 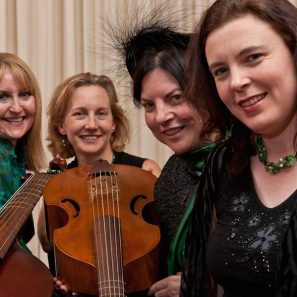 Josie and the Emeralds have received critical acclaim for their nuanced and innovative performances of medieval, renaissance, baroque and contemporary music. Their recordings have been broadcast on ABC Classic FM and Fine Music.

Various works by Brooke Green originally written for Josie and the Emeralds have appeared in other guises. The Shades won the audience and judges’ prize at the Viola da Gamba Society of America’s Traynor Competition for New Viol Music 2013. Reza Barati has been arranged for Latitude 37, Melbourne Metropolis Festival, 2017 and for Camerata, Queensland Music Festival, 2017. Perfumed with Blood has been arranged for orchestra for The Bourbaki Ensemble. Shades of Presence Past and Emerald Elixirs are published by PRB Music, California with Two In Nomines due for publication in 2018.