Somewhere, on the edge of a universe, an Astronaut hesitates for a moment too long.

Half a world away, a familiar patch of earth begins to shrink, a whispered argument begins, and a best friend is discovered missing.

Moonchild’s mission is clear. And liftoff? Imminent. But as Moonchild reaches for her destiny, her world begins to unravel…

A striking new work from playwright Julia Patey (Voices Project 2015, ATYP), Moonchild is a tender celebration of friendship, courage and finding your landing gear when you’ve been pushed beyond your stratosphere.

This project is the second in a trilogy of works from WE MAKE THEATRE, a creative partnership between theatremakers Julia Patey (23) and Scarlett Waters (13).

Specialising in the creation of new work for the stage, WE MAKE THEATRE’s premiere production When am I gonna be what I’m gonna be opened at Bondi Feast in 2015 to a sold out and extended season.

Moonchild premieres at ATYP in August 2016, as a part of ATYP’s Cameo Series, their independent season. This means Moonchild is entirely independently funded by WE MAKE THEATRE.

And theatre costs money. Lots of it.

Your support will ensure that the WE MAKE THEATRE creative team is able to tell Moonchild’s story at a professional standard.

Every dollar donated will go toward production costs including: venue hire, set construction, lighting hire and costume creation. Your support will directly impact the reach our marketing is able to have. The more people that know about Moonchild, the better. And your donation can make that happen.

We know it’s our most exciting work yet. All we need is a little help getting it up on its feet.

With your help, we’ll be right where we need to be : Ready for lift off. 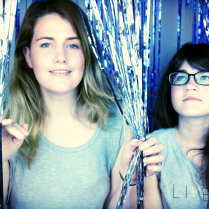 WE MAKE THEATRE is an artistic partnership between theatre makers Julia Patey (23) and Scarlett Waters (13). Best friends, storytelling enthusiasts and makers of worlds, WE MAKE THEATRE create theatre about growing up, getting lost and not waiting around for permission.

We believe that storytelling is the most powerful form of communication, change and connection. We tell stories by young people for audiences of all ages.

Their first work together, WHEN AM I GONNA BE WHAT I’M GONNA BE, premiered at Rock Surfers Theatre Company, Sydney for Bondi Feast in 2015 to a sold out and extended season.

Their upcoming work MOONCHILD will premiere at the Australian Theatre for Young People on August 20, 2016.