“Mockingbird is a black comedy about mental health, that shines a light on the experience of new mums who may be struggling. In Mockingbird, writer/actor Lisa Brickell uses her own family’s experience and my research into historical healthcare records, to tell the stories of four generations of women as they become mothers. The purpose of Mockingbird is to educate both healthcare professionals and the community about mental distress after childbirth. To do this we want to make Mockingbird as accessible as possible to everyone, and the best way to do this is to make a film to broaden Mockingbird’s reach.”  Dr Diana Jefferies: School of Nursing and Midwifery at Western Sydney University.

Although the period after the birth of a child is considered to be one of the happiest times during a woman’s life, we know that 1 in 5 women experience mental distress during the first year of their baby’s life. 20% of new mums who experience depression, anxiety or psychosis have an increased risk of suicide during the first six months of motherhood. And the bond between the mother and the child can be compromised, leading to life long psychological problems for both.

Recent research shows that many new mums are reluctant to disclose symptoms of mental distress because:
It’s supposed to a happy time and women feel ashamed of not feeling happy all the time.
Many women are afraid that they will lose custody of their babies if they admit they are having difficulties caring for their babies.

When women do see health professionals, they find there is a focus on the baby’s needs, and nobody asks how they are feeling.

We want to raise awareness about how some of our new mums might need a helping hand so they can care for their babies as they recover.

“Mockingbird is a clever, sensitive exploration of mental health. Funny and moving, it sheds light on an issue that affects many people but remains taboo even in our modern society.”
– Sam Baran, Sambaranmedia, Sydney

Your donations will go towards script adaptation, crewing, cast, production equipment, catering, production design, costuming, as well as marketing and promotion costs. This is a tight budget but with your support, we can bring this project to fruition and the film of Mockingbird can be presented at film festivals and in workshop formats so that the issues of postnatal distress can be highlighted.

For more information head to our Facebook page: Mockingbird – A black comedy about mental health 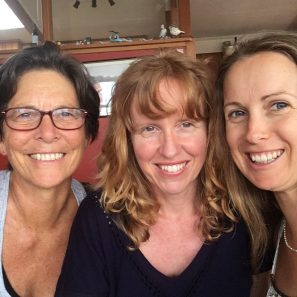 Lisa Brickell – Writer and Actor trained in comedy, mask work and physical theatre at The Lecoq Theatre School in Paris and with Giovanni Fusetti and Antonio Fava in Italy. She also has a MA in Drama from Auckland University. She has directed and performed in theatre, film and TV in New Zealand, Australia and other countries, including with companies such as Theatre and Beyond (UK), Komedia (UK) and Tantimutanticompanganti (Italy/ France/Brazil). .www.funny-business.co.nz

Siri Embla is an international freelance multidisciplinary performance artist, actor, musician, clown and facilitator. Siri trained at WAAPA in Perth, Bårdar Akademiet in Oslo, and studied physical theatre/clowning and improvisation with world class teachers such as Al Wunder, Ira Seidenstain and Giovanni Fusetti. She currently works with Clown Doctors in Norway. She has devised and performed several shows and worked with a range of different directors and companies.

Ruth Dudding – Co-Director is a professional freelance actor, director and film-maker. She graduated from Toi Whakaari, in Wellington in 1982, studied at L’Ecole Jacques Le Coq, in Paris in 1985 and has worked widely in the New Zealand film, television and theatre community ever since.

Thank you to everyone who has supported this project- there are 3 days to go- if you have not donated, please do- every dollar counts!

Just 4 days to go until the end of this campaign- please donate to make the film version of Mockingbird- thank you!

Thank you again to all our supporters but if you haven’t donated yet, there is only 12 days to go- even $5.00 will make a difference!

There is only two weeks left to donate to Mockingbird- making a film of Mockingbird will really get the message out about maternal distress after childbirth!

Again to everyone who has donated to this project thank you! It means the world tyo the Mockingbird team that you are all behind us

We are so grateful for all the support we receive, please donate to this project so a film of Mockingbird can become a reality. Even $5.00 will make a big difference!

Thank you to everyone who has supported this project. We have received so much positive feedback Please donate so we can make a film of Mockingbird and raise the profile of maternal mental distress

Thank you to everyone who has donated to the Mockingbird project because you are making a difference in the lives of women experiencing mental distress. Please continue to share this campaign.

Thank you to Giovanni Fusetti whose input into the script development and co-directing the production was invaluable and never forgotten!