Mad Bitches Inc. stars both professional actors and people who haven’t performed for years. It was inspired by an interview by British artist Tracey Emin with Frieze magazine, who spoke about the need to “break the chain”. I asked the artists involved in the show to create new work in response to this phrase: what holds them back? What did they think held other woman back? How can we break the chain?
I wanted them to make work that was wild, smart, sexy and powerful.

It’s really important to support new theatre, as opposed to watching re-runs of The Mousetrap, because it helps create the next generation of Mousetraps. Without this support, the current generation of contemporary playwrights, theatre producers and actors find it difficult to sustain their careers. Fringe Festivals act as a seed bed for many of these new works. If they’re well-received by audiences, they tend to tour and reinvent themselves in different forms.

A particularly good reason to support Mad Bitches Inc. is that it foregrounds the work of female theatre directors, producers, actors, musicians, poets and playwrights at various stages of their careers. With the exception of Fiona Leonard, all of these creatives live in regional Australia and many of them face the difficult dance of sustaining a career in the arts while also raising families and holding down jobs.

As the show’s producer, I’m asking for help launching Mad Bitches Inc. at Newcastle Fringe Festival and then touring it to the inaugural Dubbo Fringe Festival.

All ticket sales from Mad Bitches Inc. will be divided equally between the show’s performers, writers, backstage crew and producers. As this is an inclusive production that showcases people at various career and life stages, this means a relatively small amount of money will be split between a relatively large number of people.

Donations will be used to support three areas: (1) to offset production costs such as insurance and printing, (2) to tour the show to the inaugural Dubbo Fringe Festival and if possible (3) to supplement performers’ wages.

Performance breeds confidence and careers. The experience of participating in Mad Bitches Inc. will be empowering not only for the audiences but also the performers. As a producer, I’ll use these first iterations of Mad Bitches Inc. to continue to grow, develop and tour the show. Each time a performer gets up on stage, they learn something new about themselves and about connecting with an audience.

Mad Bitches Inc. is going to be a game-changing production for many women! 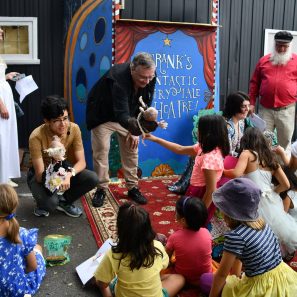 Frank’s Fantastic Fairy Tale Theatre is a puppet theatre recently established in Maitland, NSW. Frank’s tells traditional fairy tales in new ways for contemporary families. Our vision is to celebrate puppetry as an expressive and experimental art form in Maitland and the Hunter Valley. The Theatre is loosely based on the Queen’s Theatre at Versailles, with an eighteenth-century style aesthetic, and all our props, puppets and costumes are handmade. Since our first performance in early September, 2017, we have performed on the streets of Maitland, in art galleries and at festivals, parties, libraries, community events, daycare centres and markets. Our dream is to perform across Australia, and so we are seeking funding to convert a horsefloat into a portable puppet theatre.

The Band Association of NSW presents an online festival, showcasing entries from community brass, concert and school bands across Australia.