We plan on presenting this project with a couple of visual rules that we as the film makers have given ourselves.

We shoot in 4:3 (old school square format). Why? Our character is introverted and always used to being comfortable. We are translating that visually by giving her a tight frame that she never shares. The camera will not move. We wish to explore her life as still as possible. Not your standard coverage. We want the audience to be as immersed as possible and to do this we will be taking risks and minimise the cutting as much as possible.

Our aim with this campaign is to raise $5000 in 1 month to help us reach the films full potential.

Your donations will be divided evenly to all departments from camera, production design, costumes as well as catering. This allows us to pay our very talented crew to help us tell the story the way it needs to be told and get the best result. We plan to go into production in mid May.

When a donor gives to our campaign they will receive a tax deductible receipt.

Our goal is to create an honest well told story that will connect with all audience around the world through film festivals. 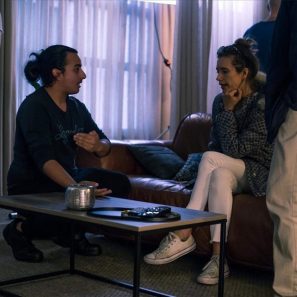 AT JUST 24 YEARS OLD, RODRIGO BADOINO HAS WRITTEN AND DIRECTED OVER 7 SHORT FILMS, TV EPS, ADS AND MUSIC VIDEOS. THIS YEAR HE WROTE AND DIRECTED ‘EMMANUEL’ WHICH PREMIERED AT THE 2018 CANNES FILM FESTIVAL AS PART OF THE SHORT FILM CORNER. HE HAS SINCE CO-WRITTEN AND DIRECTED HIS FIRST TELEVISION PILOT “HITMAN” WHICH IS CURRENTLY IN POST PRODUCTION AND IS ALREADY IN TALKS WITH SCREEN AUSTRALIA AND STAN TO BE PICKED UP. HIS PASSION AS A WRITER HAS LED HIM TO WRITE OVER 40 SHORT FILMS AND NUMEROUS FEATURES.