Our 6×20 min TV series is a teen drama with a big emphasis on LGBTQI+ normality & inclusion. Written by teens, it’s the authentic voice of a generation. Literary Lethargy follows five diverse 17-yr-old students, thrown together in an extension English class. In an authentically raw & true tone, it explores the real issues surrounding teen life.

In development since the COVID half of 2020, due to cast restriction/availability, our filming window is Jan/Feb 2021. We have 80% of our series budget funded from our EP, but we have to raise the remaining 20% to get green-lit.

When co-creator/actor/producer Olivia Deeble came up with the idea, it was in response to a gruelling LA pilot season auditioning for American teen drama, where the only roles on offer were cookie-cutter high school stereotypes, rehashed for a millennial audience, but not one she could relate to. Desperate to see characters and dialogue that represented her peers & her life, she decided to write it herself.

Instead of voices that depict teen lives as some sort of ‘Hollywood fantasy’, this is a portrayal of the actual drama this generation is faced with, in a real, authentic and empathetic way, not an adult exercise in objectifying youth.

As our non-binary queer teen co-creator Luka says (click on the video above) ‘I have never seen someone like me on TV’. This isn’t a story about overcoming being gay, or your sexuality being your plot, this is the story of the issues, joys & drama that every teen faces.

End result: The opportunity for this young generation to see themselves on screen from the perspective of someone living it in the now, in a professional, consumable format.

Support & interest in this has been fantastic: parents, teens, LGBTQI+ community, distributors & people who care about our youth voices. We just need the final financial support to get it on screen

You can be part of making something unique. Please donate to support a diverse inclusive youth voice, let them know you celebrate who they are & what they have to say. 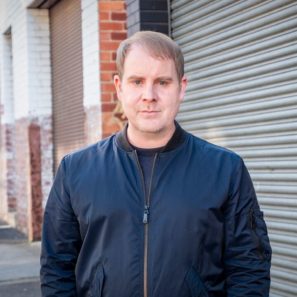 John is a multi-award-winning director in Film, Theatre and Opera.

John’s first feature film H IS FOR HAPPINESS for Cyan Films, Universal Pictures Australia and Level K had its world premiere at the 2019 MIFF, won the Film Prize at Cinefest Oz 2019 and had its European premiere at Berlin International Film festival in 2020, where it garnered the Jury award for the Generation Kplus International Prize as well as winning Best Feature Film at the Zlin International Film Festival and the Kids Kino International Festival. The film will be released theatrically in Australia, Europe and the US this year.