A Cantata is a form of classical music for solo singers, choir and orchestra. The Kristallnacht Cantata describes the events in Germany leading to the pogrom of 1938 with special reference to the intervention of Aboriginal leader William Cooper, depicted as a role model for social justice and respect across diverse communities.

Based on real people and events with minimal artistic license in order to educate the public. In this particular cantata, a metaphysical bond connects a Jewish-German man in Stuttgart, Otto Jontof-Hutter with William Cooper who was based in Melbourne. It concludes with a note of optimism in which William Cooper’s and Jontof-Hutter’s vision of basic human decency and social justice are cherished as universal values to strive for in a turbulent world.

This project is aimed at the public with special reference to diverse communities, especially First Nation people and the Jewish community. The Cantata will be premiered in Melbourne, 8 December 2019.

The aim of this project is to raise awareness of the unique and extraordinary Australian story in the history of protest against the Jewish Holocaust. This hardly known story is relevant and resonates today, affirming the need for tolerance and respect in culturally diverse societies.

Support is essential for this highly regarded endeavour by First Nation elders, community leaders, and leading artists. It will involve an orchestra, choir, solo singers and multi-media art all aimed to deliver a world-class performance.

Our aim is to raise $46,275 to cover costs of creation, performance, and venues.

All donations over $2 are tax-deductible will only be used to cover productions costs. All funds raised exceeding production costs of the Cantata will go to the following charities: Mullum Mullum Indigenous Gathering Place LTD, Jewish Care, and Magpie Nest Social Housing Project. Our aim is to ensure a memorable performance that will not only deliver an outstanding experience for those present at the live performances but will also be video recorded for educational purposes.

For further information including a trailer: www.kncantata.com 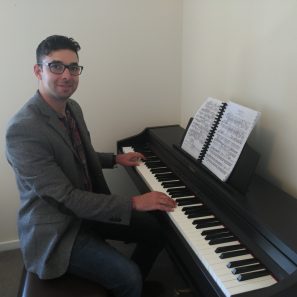 M.Mus, B.Mus (The Jerusalem Academy of Music and Dance)
PhD candidate (The University of Melbourne)

Alon has written a diverse portfolio of compositions ranging from pieces for solo instruments, chamber works, choral works to pieces for larger forces that include orchestral works and a piano concerto.

The Kristallnacht Cantata that is being composed to commemorate the 80th anniversary of Aboriginal leader William Cooper’s unique protest against “Kristallnacht.” The Cantata will involve a multi-disciplinary approach that will incorporate a chamber orchestra, chamber choir, two vocal soloists, enhanced staging and audio-visuals. The Cantata’s duration will be approximately 35 minutes.
The 80th anniversary of “Kristallnacht” this year comes at a time when Holocaust survivors are rapidly diminishing, coupled with increasing concerns about current extremism, racial hatred and apathy. In this milieu, a hero like Aboriginal leader William Cooper serves as a role model for social justice, The cantata concludes with a note of optimism in which William Cooper’s vision of basic human decency and social justice are held as values to strive for.

Ngutu is an innovative learning environment with Aboriginal cultures as its soul, young people as its heart, and the Arts as its spine.

The Sunshine Coast Arts Foundation promotes the development and prosperity of the arts on the Sunshine Coast through fundraising and philanthropic investment in partnership with artists and creative organisations.