A feature-length documentary taking viewers on a fascinating journey of discovery, walking in the footsteps of those, who in 1942, against all odds, withstood Japan’s previously unstoppable Pacific invasion force preserve Australia’s freedom.

A modern telling of the Kokoda story, its significance in the Pacific War and an exploration of the enduring spirit which sustained the Kokoda Diggers and which still inspires Australians today.

The film will bring the story to life through the eyes of those who fought the campaign – Australians, New Guineans and Japanese – drawing from more than 100 participant interviews that Writer/Director Patrick Lindsay has conducted over 25 years (most of whom, sadly, have now left us).

The central narrative will interweave these interviews (and new ones) with historic footage, purpose-shot re-enactments, and set-ups, drone vision on location and CGI illustrations of the Track and the iconic battle sites.

The film will explore the story’s continuing relevance by showing how the Diggers drew on what we now call ‘the Kokoda spirit’ as they fought for their survival and our freedman it will illustrate the continuing power of that spirit today.

The film will introduce viewers to the heroes of the campaign and show their timeless sacrifices for their mates and their families back home. We’ll meet the descendants of the beloved ‘Fuzzy Wuzzy Angels’ and learn of their vital role in the story and the impact the battles had on them.

We’ll experience the Track’s fierce beauty and witness the spell it weaves on the thousands of trekker who walk it each year. We’ll meet many others inspired by Kokoda who work to improve lives in PNG and who use the experience to improve their own lives.

Writer/Director Patrick Lindsay will be joined by Director of Photography, Paul Croll, one of Australia’s finest cinematographers, who’ll call on his hard-won experience of more than 30 Kokoda Track crossings to capture the drama of the campaign and the treacherous terrain that served as its backdrop.

We aim to keep the story alive and to hand it on to the digital generation through a co-ordinated outreach campaign via viewings at RSL clubs across the nation, as part of the broader Kokoda 75th Anniversary commemorations throughout 2017. These will be augmented and expanded by an intensive social media support campaign and a dedicated website.

In anticipation of your support, we give you great thanks – your support will allow us to keep the story of Kokoda alive. 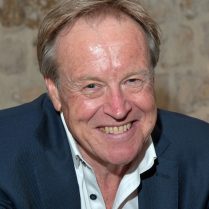 Patrick Lindsay is one of Australia’s leading non-fiction authors, having written 20 best-selling books, including The Spirit of Kokoda, The Spirit of The Digger, Back from the Dead (on the Bali bombing), The Spirit of Gallipoli, Heart of a Champion (the Greg Welch biography), Cosgrove, Portrait of a Leader (General Peter Cosgrove biography), Fromelles, Kokoda Spirit, Our Darkest Day, The Coast Watchers and True Blue, the history of the NSW Police Force.

He has written five books in his best-selling It’s Never Too Late motivational series, also published in the UK, US, The Netherlands, Indonesia, Korea and France.

Patrick is also a prominent broadcaster and documentary maker, having worked as a presenter, reporter, producer and writer for the Nine, Seven and Sky networks for more than 25 years. He created the format for the highly-acclaimed reality TV series, In Their Footsteps, produced by Shine on the Nine Network in 2010. He also created the Kokoda App to bring the WWII campaign to the digital generation.

In 2015 he was named a Member of the Order of Australia for ‘significant service to the media as a television presenter and journalist, to international relations, and to literature as an author’.