The Kampot Playboys have been asked to perform at the Darwin Festival in August, specifically the 9th of August. It would be their first ever performance outside Asia. We are looking to fund raise the difference between what the festival can afford to offer and what it will realistically cost to tour and accommodate the Kampot Playboys.

The Kampot Playboys are currently the most important exponent of contemporary Khmer music and the revival of pre-civil war music. Having very limited exposure to the outside world, this is an opportunity, particularly for the Khmer members, to experience a professional festival, gain a better understanding of Australia and the world and help build artistic bridges between Australia and Asia. Consisting of members from Australia, Cambodia and England and having released their debut album, Garuda, in 2018, the Kampot Playboys are truly a unique fusion act with the potential to go on to play at the worlds major festivals. Performing at the Darwin Festival is the start of that journey and it is the hope they will be seen and picked up by Artistic Directors from other festivals around Australia and the world.

The donations will be used solely to enable the Kampot Playboys to fly to Darwin, Australia, perform at the Darwin Festival and to cover their expenses, performance fees and per diems. 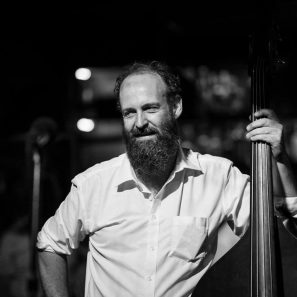 Dan Davies is one of Darwin’s premier musicians. He has toured and performed with a staggering array of acts including the Cambodian Space Project, Jess Ribeiro, Bunna Lawrie, Bill Chambers, Leo Rondeau (USA), the Darwin Symphony Orchestra, Neil Murray and Yothu Yindi along with cabaret shows and pit orchestras. He has performed at numerous festivals nationally and internationally including every Darwin Festival for over a decade. He has been a member of David Garnham and the Reasons to Live since 2011, recording their debut album, Love Inside a Jar and their recent (to be released) recordings, touring extensively with them over many years.

For five years Dan managed Darwin’s only original music venue and music development organisation, the Happy Yess, and he continues to be a judge for the annual NT Battle of the School Bands competition. In 2017 Dan was awarded an Asialink residency to spend 12 weeks in Cambodia working with the Kampot Arts and Music Association, presenting and recording music. Through the contacts made in Cambodia during the residency he has continued to return and collaborate with Cambodian based musicians most recently two trips in 2019.

Dan holds a Bachelor of Music and a Diploma of Music Industry.

Thanks to everyone who has donated so far! Although the page says we’ve been funded 196% of what we need, in actual fact we’re still a little bit short of where we’d be ideally with two days to go!