Steel City Strings planned an exciting 2020 season with a premiere of an Elena Kats-Chernin work in an all Australian program and a collaboration with acclaimed didgeridoo player William Barton. Both these events were cancelled due to the COVID-19 crisis. We are determined to keep our orchestra members and audience engaged during this collapse in the arts industry to see us through to the other side.

The project is an online show that will be streamed via Facebook to celebrate music and bring our communities together despite the challenges imposed by disaster and this health crisis.

Our audience and supporters need to see and hear us making music to maintain support for their regional orchestra. Our players need to feel valued and maintain connections with each other so that our orchestra family survives this crisis. It is vital to keep our musicians engaged to maintain their motivation and skills, so we can return to performing when restrictions are lifted.

The funds raised will go towards production costs including AV technicians, musicians’ fees and learning how to use technology to make music and engage with our audience.

We will broadcast free a meaningful performance at the beginning of July for disaster affected communities in our region with works about the recent bushfires and the experience of isolation. Local composer John Spence from the Wollongong Conservatorium has dedicated a new work to victims of the bushfires. The remaining repertoire includes music by Borodin, Prokoviev and possibly Elena Kats-Chernin from the Isolation Suite currently in development.

The project will keep some of our musicians and partners employed at a time when there is no income from live performance. Digital delivery oﬀers a new avenue for audience development and engagement from far and wide. The learning will be shared across the orchestra so that this digital presentation model will be transferable to other smaller ensembles of Steel City Strings players and other music groups in our local community to apply in the future.

Double the value of your donation! Thanks to Creative Partnerships Australia’s ACF Boost program, donations to this campaign will be matched dollar for dollar up to $5,000. 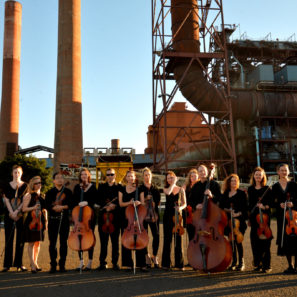 Steel City Strings is a Wollongong-based string orchestra of musicians from the Illawarra, Shoalhaven, and Southern Highlands of NSW regions. Since its inception in 2015 as a not-for-profit incorporated charity, the orchestra has delighted music lovers by presenting fine music from a range of genres in nine concerts a year in townships across our region.

Led by Conductor Luke Spicer and Artistic Director Kyle Little, the orchestra provides performing and professional development opportunities for musicians in the South Coast and Southern Highlands as orchestra members, soloists and composers.

2019 was a milestone year for the ensemble in winning the APRA Art Music Award for Excellence in a Regional Area, playing on an episode of The Bachelor on Channel 9 and recording Ann Carr-Boyd’s works for strings. An ensemble from the orchestra played with William Barton at the 2019 Illawarra Business Chamber Awards, leading to an ongoing relationship with the organisation.

The premiere of a new work by Elena Kats-Chernin, ‘Cinque Forme d’Amore’ (‘Five Kinds of Love’), commissioned by a local philanthropist to open the orchestra’s season, was cancelled due to the pandemic. This all Australian program has been re-scheduled for late 2020, restrictions permitting.

Double the value of your donation! Thanks to Creative Partnerships Australia’s ACF Boost program, every dollar you preference to this campaign will be matched dollar for dollar up to $5,000.

Thanks and goodbye (for the moment)

Dear wonderful donors
In the words of one of our players: “What an amazing outcome! – it’s wonderful to feel so supported by the community.”
You will be hearing from us soon with more treats.

It’s the final week of our campaign and we are thrilled with the response so far. Our Isolation Strings quartet are busily rehearsing safely. Watch out for a sneak peek coming up soon.

The generous response by our donors has been a great morale-booster for the orchestra members, as they learn a whole new way of ensemble playing. Thank you all, and please tell your friends.

Our thanks go to the 6 anonymous donors who in the first week of the campaign have between them donated $333 – thank you!

It’s only day 3 and we have already exceeded our target for matched funding of $5000, and the donations keep coming. This support has lifted the spirits of our players, busy rehearsing at home!