This VCA Masters graduate short film charts a powerful switch in the relationship between mentor and student in a faith based drug and alcohol rehab.

Near the end of his year-long program, recovering addict Andrew gives a candid public testimony, but the hostile response from some churchgoers causes a spiral toward relapse. Faced with Andrew’s imminent escape, the youngest in the program – Rob – hijacks a group therapy session to save his best friend and mentor.

I came upon this unique project rather accidentally.

While visiting a church in regional NSW I witnessed the eye opening testimonies of three recovered ice addicts. They were honest, emotional accounts of addiction, violence and subsequent redemption. I was left shell-shocked by the vulnerability in their voices but unsure about how to process it all; if there was a film percolating, it needed to go beyond a study of addiction. Their experiences demanded greater research be made and trust built.

Over the next few months I made numerous trips back to the faith-based rehab that had seen these men graduate (and some of them now teach from). I immersed myself in the details of rehab life and observed the courage demanded of men to stay in the program.

The irony of watching newer students sometimes need to step up for their senior mentors was emotionally captivating, and is at the heart of this compelling short film.

Your tax deductible donation will be used in part to cover outstanding expenses from the recently completed shoot such as equipment hire, actor fees, location fees and catering costs.

Donations will also fund the vital post production process. As you can see from the production stills above, I have incredible raw material to work with – but I need your help to ensure the project finishes with a strong musical score and sound design.

Finally, donations will also be used to fund the film’s festival strategy, key to finding the right audience for this inspiring story. I will build upon on past experience that saw my previous two films, ‘Grounded’ and ‘A Stone’s Throw’ screen at film festivals nationally and internationally to awards and acclaim.

My greatest hope is that I’ll get to share this film back in rehab with the brave men who inspired me to make it. 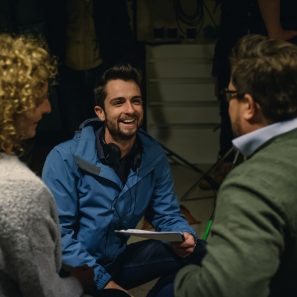 Enamoured with a distinctly hopeful worldview, I create films about society’s most fascinating, often broken people.

I’m a Melbourne based narrative filmmaker. My short films “Grounded” and “A Stone’s Throw” have won awards and screened at home in Australia, in Europe and around the US.

I’m always seeking to move audiences emotionally and make accessible the difficult stories I am drawn to.

The Art of Friendship is a short documentary that will form part of an exhibition celebrating an unusual 20-year friendship between communities in two very different parts of the world.

Friends of Mine - Post-Production

In this uniquely talky, witty, and slightly shmaltzy short film, a wannabe cultural-critic gets stuck in a one-sided love affair with an older woman, while his secret admirer plots to make her feelings clear to him.